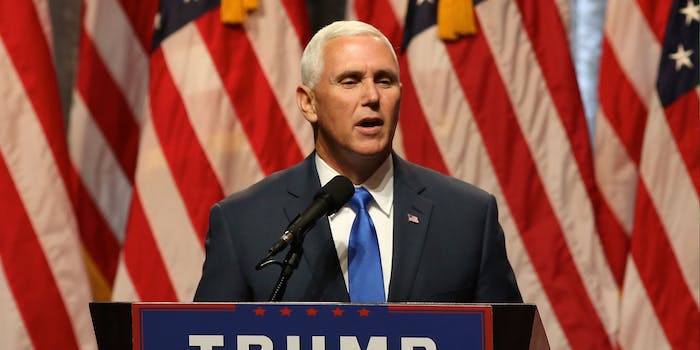 The vice presidential candidate also ran stories that said LGBT people eat feces and suggested homosexuality was based in pedophilia.

Donald Trump’s Republican vice presidential candidate Mike Pence will be remembered for many things: the controversial anti-LGBT “religious freedom” law he passed as Governor of Indiana, the brutal 20-year prison sentence of an Indiana woman who induced her own miscarriage, and for being on the receiving end of some pretty explicit trolling via the #PeriodsForPence movement.

But after Right Wing Watch uncovered some of the work Pence wrote and published on LGBT issues on Wednesday, he will also go down in history as the editor of some shockingly homophobic articles.

Pence was president of the Indiana Policy Review (a conservative foundation and journal) from 1991–1994, and during his tenure, published articles that urged media companies not to hire gay writers and editors, claimed that gay men regularly ate feces and “showered in the urine of others,” and suggested that homosexuality was based on pedophilia.

Pence also wrote articles under his own name after resigning as the foundation’s president to go into talk radio (where he called himself “Rush Limbaugh on decaf”). In one such piece, Pence mourned the poor television ratings of the 1996 Republican National Convention, blaming the “pro-choice women, AIDS activists, and proponents of affirmative action” who had “struck a chord with the Washington press corps.”

But it was the articles that Pence published as editor that were most blatant in their anti-LGBT statements. One 1993 article by R.D. Ray argued against military inclusion of women and homosexuals, stating that both were unfit for service. While Ray asserted that women should be banned from the military simply because they “physically have one-third less strength, agility, speed, and endurance than men,” his reasons for continuing the ban on gay soldiers was a bit more imaginative.

Ray argued that gay men in the military would, basically, infect the service with their filthy sexual habits—which he claimed included eating feces, showering in other people’s urine, and engaging in “sexual practices involving degradation or humiliation rarely practiced by heterosexuals.” Ray also wrote that homosexuality was a direct threat to national security because CIA agents had supposedly “turned against their country” because of blackmail related to homosexual sex—a problem he admits in the previous paragraph that the CIA said never actually existed.

Ray’s article manages to cover a stunning amount of territory in terms of antiquated arguments against LGBT rights: Pedophilia is the foundation of same-sex attraction, gay men are nothing more than disease vectors, closeted gay men are vulnerable to extortion and blackmail (yet, they should stay closeted for that reason). Even for a conservative journal, it’s pretty extreme for the 1990s.

Another article Pence’s journal published warned of the dangers of “the Pink Newsroom.” Written without a byline, the short piece urges newspapers not to hire “a gay,” arguing that having a gay editor or writer publishing on gay topics would be like “the owner of the local Ford dealership” writing about Ford cars. Basically, having LGBT people working in newsrooms is unethical.

Arguing that “gaydom” shouldn’t be “elevated from a pathological condition,” the unknown writer also suggested that gay employees wouldn’t be able to do their jobs because their focus would be “the special interest of organized homosexuals.”

It’s not exactly news to LGBT advocates that Mike Pence has a severely anti-LGBT track record. After all, the Indiana governor signed a 2013 bill that would send same-sex couples to jail if they even tried to apply for a marriage license—and jail the county clerks, too, if they tried to comply.

But what’s fascinating about the resurfacing of the 1990s Indiana Policy Review journal is just how long Pence has been chipping away at LGBT rights. Whether he becomes the next vice president of the United States or not, you’ve got to give it to Mike Pence for consistency.