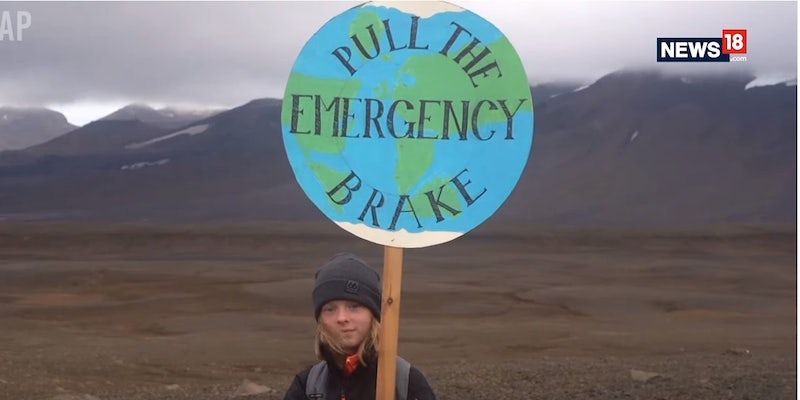 Event was to draw attention to climate change.

The world’s glaciers are shrinking due to human-caused climate change.

Over the weekend, Iceland held a funeral to honor its first glacier to die.

Roughly 100 activists hiked two hours to the top of the volcano where the glacier, Okjokull, once loomed large over the landscape. Icelandic geologist Oddur Sigurðsson told PBS that Okjokull was once six square miles (15 square kilometers). Today is it smaller than one square kilometer.

Sigurðsson declared the glacier, now known simply as Ok (its original name minus the Icelandic word for ‘glacier’), extinct a decade ago.

“We are seeing the faces of the climate crisis differently around the world, but it’s the same crisis and we need international cooperation on an unprecedented scale,” said Icelandic Prime Minister Katrín Jakobsdóttir.

“We really need to rethink the way we are working to meet this challenge.”

Every month that passes seems to bring another dire warning about the fate of the planet if carbon emissions continue pouring out from cars, factories, power plants, and, yes, cows. All of the ten hottest years on record have occurred in the last two decades, according to Climate Central. The last five years are the hottest five years on record.

Yet little has changed about the debate in American politics. In response, environmentalists have become increasingly creative to foster awareness. Thus far in 2019, the 10-year challenge inspired climate change memes and perennial even-keeled Bill Nye went on an expletive-filled rant about the issue. Saturday’s glacier funeral was another such effort.

The somber service memorializing the first to fall, Okjokull, included speeches, poetry, and moments of silence. Scientists predict that Iceland will lose all of its more than 400 glaciers in the next two centuries.

At the end of the service, children placed a plaque on a bare rock where the glacier once stood. In Icelandic and English, it reads:

“Ok is the first Icelandic glacier to lose its status as a glacier. In the next 200 years, all our glaciers are expected to follow the same path. This monument is to acknowledge that we know what is happening and what needs to be done. Only you know if we did it. August 2019 415 ppm CO2”

Scientists consider 350 ppm (parts per million) CO2 to be the safest maximum amount of carbon in the atmosphere. Atmospheric CO2 currently sits at 415 ppm.

Some who chimed in on Twitter mocked people for mourning the death of an inanimate object. But many were moved.

You know shits gettin real when they held a FUNERAL for a GLACIER https://t.co/qevDkkIYyT

And Trump the twat wanna buy Greenland. Where he guaranteed would start hard industrialization and treat the glaciers like Nestlé treat fresh water sources in Africa.
People like him are a threat to the globe. Glaciers included.

tbh at this point, holding a funeral for a dead glacier with a passive aggressive letter to "the future" on a plaque is the exact level of petty we need. #Iceland holds funeral for its first #glacier lost to #climatechange https://t.co/UzKDMEqUvR pic.twitter.com/3PxG7ogY5K

Another funeral service will be held for the fallen Pizol glacier in Switzerland on September 22.