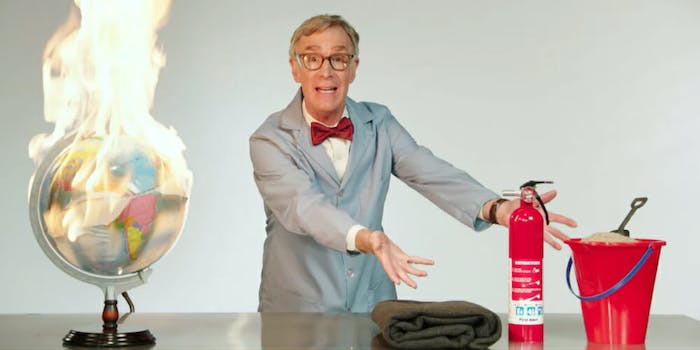 'Grow the f*ck up. You’re not children anymore.'

Bill Nye is not playing around anymore when it comes to climate change. The science guy we all know and love was featured in Last Week Tonight with John Oliver and dropped some F-bombs to discuss the severity of the issue.

“Grow the fuck up. You’re not children anymore,” Nye says in the now-viral video. “I didn’t mind explaining photosynthesis to you when you were 12. But you’re adults now, and this is an actual crisis, got it? Safety glasses off, motherfuckers.”

Nye is an advocate for the Green New Deal, and both him and Oliver backed it on the HBO show Sunday night. The deal, sponsored by Rep. Alexandria Ocasio-Cortez (D-N.Y.) and Sen. Ed Markey (D-Mass.), works to address the issue of climate change.

“What I’m saying is the planet’s on fucking fire,” Nye says. “There are a lot of things we could do to put it out—are any of them free? No, of course not. Nothing’s free, you idiots.”

bill nye sitting all our grown asses down and telling us off for fucking up the planet is the most parental berating of all time and we all deserve it. I am sending myself to my room to think about what I've done

bill nye just slapped my childhood in the face with that f-bomb pic.twitter.com/u3MR65RSDf

we fucked up so much that bill nye is about to beat our asses if we don't start to take climate change serious pic.twitter.com/itwoDSxaaM

when bill nye told me im an adult now it hit different pic.twitter.com/tYCKkBXKE3

Bill Nye not the same Bill Nye we used to know 💀 pic.twitter.com/LgKef8E4vG

The Green New Deal was unanimously rejected in the Senate in March after Senate Republicans pushed for an early vote on the deal, a move Senate Democrats have called a “stunt.”

“It is a nonbinding resolution that very briefly sets out some extremely aggressive goals, including achieving net-zero greenhouse gas emissions, meeting 100% of the country’s power demand through clean, renewable and zero-emission energy sources and creating millions of good, high-wage jobs in the United States,” Oliver says.

This is not the first time Nye has used his platform to address climate change or to support Ocasio-Cortez and the deal.

AOC gets it. She sees that fear is dividing us. We can address income inequality. We can address climate change, if we get together and get to work. #SXSW @AOC pic.twitter.com/I8tSbAc97u

“By the end of this century, if emissions keep rising, the average temperature on Earth could go up another four to eight degrees,” Nye says.