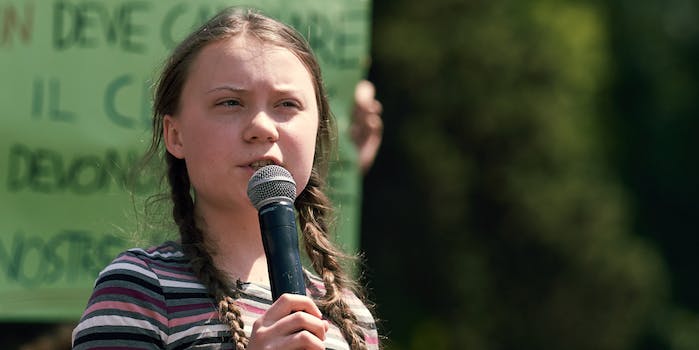 Mocking a teenager is a bad look.

British media personality and journalist Julia Hartley-Brewer taunted Swedish teenage climate activist Greta Thunberg in a tweet on Wednesday with the long haul flights Hartley-Brewer had booked for her winter family holiday. “Level of guilt being felt: 0%,” she wrote, along with a photograph of Greta.

Hi Greta, I’ve just booked some long haul flights for my family to enjoy some winter sun on the beach this Christmas.

Level of guilt being felt: 0% pic.twitter.com/BVE3JyiNgi

People were a bit astonished.

With a lot of users reminding Hartley-Brewer that she is in fact a full-grown adult criticizing a teenage girl.

Hi Julia, does it make you feel big and brave bullying a teenage girl

This is just bullying now. You are a grown woman, start behaving like one.

Yeah you really showed that child you weird old wretch

Unfortunately, there also seem to be a lot of people who either don’t believe in the reality of climate change or have decided to deliberately harm the environment in an attempt to score points against the left.

Lets remember Climate Change is a religion, by her own words today. "We prayed to gods, but now we pray to computers and climate models." This has NOTHING to do with the climate its a full blown CULT

Here here!! I stopped recycling this year cos I was sick of being preached to by lefties!!

New York next month for me, gas guzzler airport transfers to and from Manhattan. Steak dinners etc.

The comebacks are funny.

I cut my own fingers off cause lefties told me to be careful.

The road to Katie Hopkins lite is long and difficult.

News just in. So called journalist who dislikes the out of touch metropolitan liberal elite publically brags that she can afford to take her family on holiday at Xmas to the sun lit uplands.

But the number of people refusing to take climate change seriously because of political tribalism absolutely isn’t funny.

Climate change is not political. If you think it is, you are very wrong. The planet doesn't care if you are left, right, leave or remain. Lampooning is one thing, Julia is bullying her. Do you see the differences?

It’s also disturbing how many other adults are taking delight in mocking and imagining the distress of a teenager, as well as displaying bigoted attitudes towards autistic people.

A normal person would question themselves and their role when the supportive responses they receive include calls for child abuse.. pic.twitter.com/qzX5Fdud4F

While autism is a spectrum and some autistic people struggle more than others, every autistic person is affected differently and, importantly, autism does not equal a lack of capacity or understanding. Additionally, comparing autistic people to robots (which would include cyborgs) has a very nasty history. Greta, 16, has Asperger syndrome.

Her parents should be feeling guilty. She is a young girl with mental health problems as confirmed by her mother. She will easily obsess about things (given her diagnosis and indoctrination), and she is being exploited. So WE need to take this BS seriously?

She’s a cyborg. Honestly that child cannot be taken seriously, I’d rather listen to a cat than listen to anything that comes out of her mouth.

Climate change is undeniably real. According to NASA, “The current warming trend is of particular significance because most of it is extremely likely (greater than 95 percent probability) to be the result of human activity since the mid-20th century and proceeding at a rate that is unprecedented over decades to millennia.”

The consequences, listed on the same website, are acidified oceans, massive rises in sea level, and catastrophic weather events. A failure to take action now will be catastrophic.

And taunting a child is an ugly thing to do, no matter how you look at it.