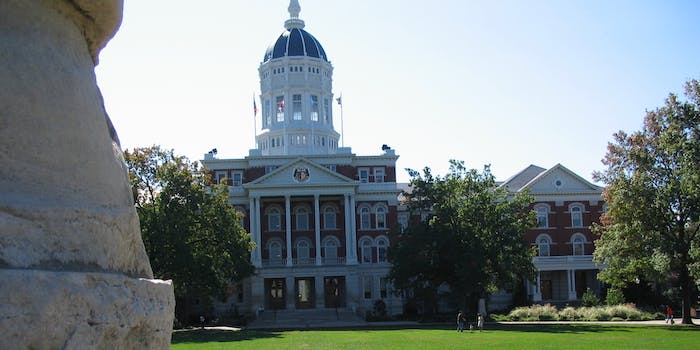 Photo by Mitch Bennett/Flickr (CC BY 2.0)

Police say the 19-year-old threatened to 'shoot every black person I see.'

The man whom authorities say threatened the lives of black students at the University of Missouri is now in police custody.

Hunter Park, 19, has been charged with making a terroristic threat. Police say Park, who is not a student at the university, is responsible for messages posted online using the gossip app Yik Yak, which threatened to murder black students en masse.

MORE THREATS @MIZZOU. Wtf are you going to do to protect your black students who pay to attend YOUR institution? pic.twitter.com/T9UJTYqP3B

Yik Yak, which allows users to anonymously post messages that are mostly only available to those within a 5-mile radius, has long been criticized as a vehicle for threats and harassment on college campuses, many of which target women and people of color. In May, a 21-year-old man was arrested after allegedly using Yik Yak to threaten a school shooting at Virginia Tech.

MU’s campus went on lockdown following discovery of the Yik Yak threat, while members of the Missouri Legislative Black Caucus met with students and R. Bowen Loftin, the university’s chancellor, on Tuesday to discuss improving racial equality and eliminating “[systemic] injustice at the state’s flagship school,” according to state Rep. Brandon Ellington (D).

The threats come at a turbulent time for the university. Tim Wolfe, the president, resigned on Monday amid accusations of institutional racism by students. Loftin also announced his intention to step down at the end of this year. Protests on the campus this week, including a hunger strike and vows from the school’s football team to not play until Wolfe resigned, follow months of heightened racial tension among the university’s 35,000 students.

Allegedly written by Park, the threat makes reference to a “stand-your-ground” law. Observed by certain states—but not Missouri—the law grants legal protection to citizens who use deadly force, at nearly any location, if he or she believes there exists an imminent threat of harm or death. Under stand your ground, citizens have no duty to retreat from a conflict or give up ground to an assailant.

Stand your ground laws have been the focus of frequent criticism, particularly following the 2013 verdict in the case against George Zimmerman that acquitted him in the shooting death of 17-year-old Trayvon Martin. While some studies indicate otherwise, supporters contend these laws act as deterrents to violent crime and prevent citizens from being punished for exercising self-defense.

Missouri observes a “castle law” instead, which only grants legal protection to citizens who use deadly force against intruders on certain types of private property—homes, motel rooms, vehicles, etc.

Photo by Mitch Bennett/Flickr (CC BY 2.0)