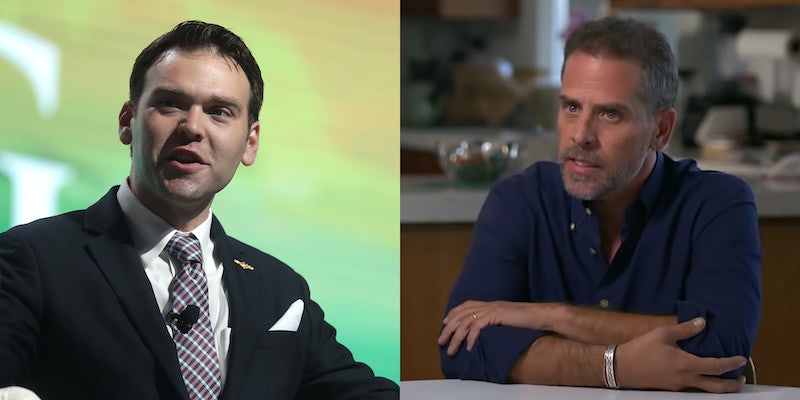 The only way to describe Hunter Biden’s laptop is that it exists in a liminal space. If it’s real, it’s a damning exposé on the corruption of former Vice President Joe Biden and his family. If it’s fake, it’s an impressive culmination of disinformation tactics from the far-right. If it’s real, it shows Hunter Biden admitting heinous crimes he should be jailed for. If it’s fake, it’s a horrific smear that will destroy his life for the sole purpose of sinking his father, the 2020 Democratic presidential nominee.

Although the laptop was originally supposed to show illicit dealings by Hunter and his father, supposedly portraying a duplicitous vice president who enriched himself at the expense of the country, that narrative has been essentially debunked.

Interestingly enough, the website the video was uploaded to appears to have some ties to Steve Bannon, the former Trump adviser who was part of a group trying to shop the laptop. That’s surely just pure coincidence.

Simultaneously, far-right media—who either have a copy of the laptop, access to it, or are being given drops from it—are convinced that the laptop also contains evidence of some form of child exploitation or abuse. The evidence is scant.

Today, the Gateway Pundit, an influential blog which at this time in 2016 was claiming Hillary Clinton was drinking during the day, published what they believe is a bombshell exclusive about Hunter Biden.

In its post, the site says it obtained proof that Joe Biden somehow tried to cover up that Hunter had a sexually inappropriate relationship with a child. The site shows heavily censored texts that claim Hunter Biden says he was “sexually inappropriate” with a redacted name that occasionally is referred to as someone’s daughter.

As with everything surrounding the laptop, there’s little to prove the texts are real. Additional texts claim to show Joe Biden’s brother asking Hunter for his side of the story, which is the evidence Gateway Pundit uses to, in its headline, claim Joe Biden is covering up child rape.

If the person involved truly was a minor—and there’s no evidence to prove that this person is or, again, that any of this is real—it would be inappropriate to identify her. So people pushing the charge are simultaneously keeping it from being verified, under the auspices of protecting the minor.

But just saying someone is a minor doesn’t quite make it so. It’s essentially the same back-and-forth as the provenance of the laptop.

That said, without providing evidence, one member of the far-right media ecosystem didn’t get the message to keep it under wraps. One America News Network’s Chanel Rion claims it was an underage member of the Biden family.

Which, again, would be shocking, jarring, and appalling. The only problem with that claim? We’re back to the beginning; no one can say if it’s true.

But the far-right media who are covering it breathlessly sure what the mainstream to handle the heavy lifting for them.