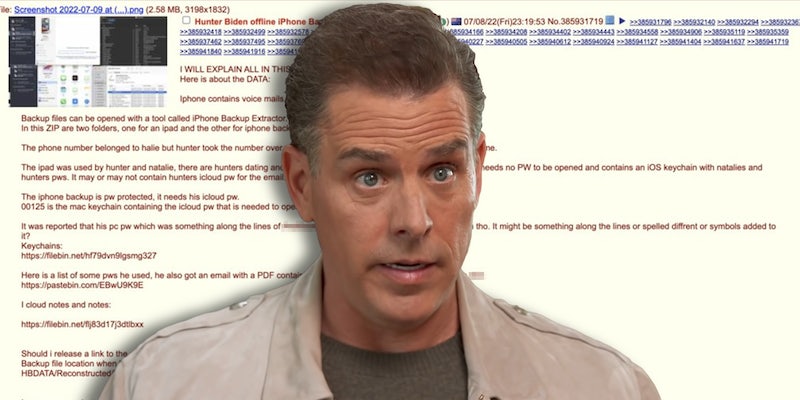 A user on 4chan claims to have hacked into the iCloud of Hunter Biden’s latest iPhone, sending the site into a tizzy as users trawled through the data dump.

In the post, the user said that they gained access to “voice mails, videos, voice recordings, pictures etc of Joe.” They also said they’d compromised an iPad belonging to him as well.

In the thread, the user also linked to a list of passwords supposedly used by Hunter.

The frenzy is similar to the uproar over Hunter Biden’s laptop, which was released in the run-up to the 2020 election, and included information that detailed his dealings in Ukraine. Some of the data within it did not match up to President Joe Biden’s denials about not being involved in his son’s foreign lobbying.

This iPhone release, however, is allegedly different from the data on Hunter’s laptop. As they scoured the data, 4chan users thought they uncovered President Biden’s number, which they claim Hunter had him listed as “Pedo Pete.”

While there’s no proof to back that up, Biden did allegedly go by Peter Henderson in contact with his son. According to one unverified claim, 4chan users were sending the phone number allegedly belonging to President Biden memes. The White House did not immediately respond to a request for comment.

It’s also unclear if the data released is real. While Hunter Biden’s old laptop—and the information within—has been essentially verified, the images and videos released here were immediately pushed by some of the biggest disinformation peddlers on the planet, raising initial questions about the veracity.

After the original post dropped, users on 4chan, wary of censorship on even the most notorious of free speech sites created numerous backups and torrents of the database, ensuring the information will continue to float around the web.

According to the Washington Examiner, admins on 4chan supposedly pulled down some of the posts about the iCloud hack.

4chan did not immediately respond to an inquiry sent to its press email.