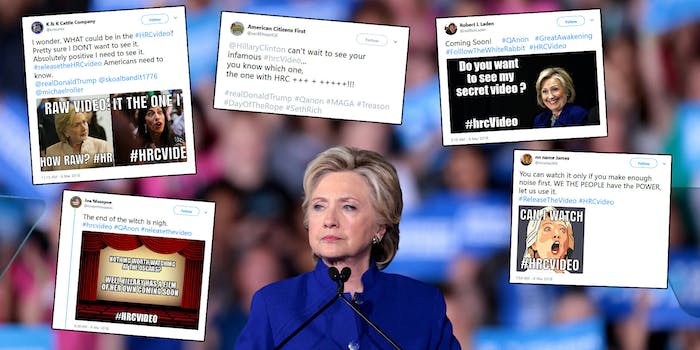 It's unclear what the supposed video actually shows.

The latest far-right conspiracy theory comes courtesy of the #HRCVideo hashtag on Twitter, after a post by notorious internet user “QAnon” lit up 4chan and other social media on Tuesday.

The post promises that a video that is “impossible to defend” and “toxic to those connected” regarding Hillary Clinton would soon be released.

“Is the stage set for a drop of HRC +++ + +++++ (raw vid 5:5). EX-rvid5774. We have it all. Re_read: stage. The nails in many coffins [liberal undo] [impossible to defend]. [toxic to those connected]. WE must work TOGETHER. WE are only as strong as your VOICE. YOU must organize to BE HEARD. THIS is why they keep you DIVIDED and in the DARK. WEAK. We are here to UNITED and provide TRUTH. Dark to LIGHT. EVIL surrounds us. WE are FIGHTING for you. Where we go one, we go ALL. The choice, to KNOW, will be yours [end].” the post reads.

The origin of this #HRCVideo mania is, of course, the latest cryptic post from a random internet user called #QAnon. pic.twitter.com/XEE62RTrQx

Soon enough a hashtag, #HRCVideo, began making the rounds on Twitter and Reddit. Several memes have been created showing Clinton and her aide Huma Abedin with #ReleaseTheVideo (a throwback to the #ReleaseTheMemo hashtag) and #HRCVideo being shared.

It’s unclear what exactly the video is supposed to show, but that hasn’t stopped a flood of speculation coming from all corners of the internet.

On Reddit, several posts quickly sparked up, with some predicting the video was from Anthony Weiner‘s laptop.

“NYPD have the video from Weiner’s laptop. Insurance file. Reports say that it made hardened New York Cops cry…. I say bring it on,” wrote one redditor.

The subreddit “Calm Before The Storm,” which discusses information from “QAnon” among other pro-Trump matters, feverishly discussed the possible contents on the #HRCVideo, with some claiming that the recent coverage of so-called “Deep Fakes“—videos that can superimpose people’s faces onto other videos—was only done to create a “narrative” that will be used to discredit the video.

You can watch it only if you make enough noise first. WE THE PEOPLE have the POWER, let us use it. #ReleaseTheVideo #HRCvideo pic.twitter.com/1DJ7h0ED2X

I wonder, WHAT could be in the #HRCvideo?
Pretty sure I DONT want to see it.
Absolutely positive I need to see it.#releasetheHRCvideo Americans need to know.@realDonaldTrump @skoalbandit1776 @michaelroller pic.twitter.com/HgagJE5XfR

While there’s no proof that any such video exists, we’ll keep you posted.