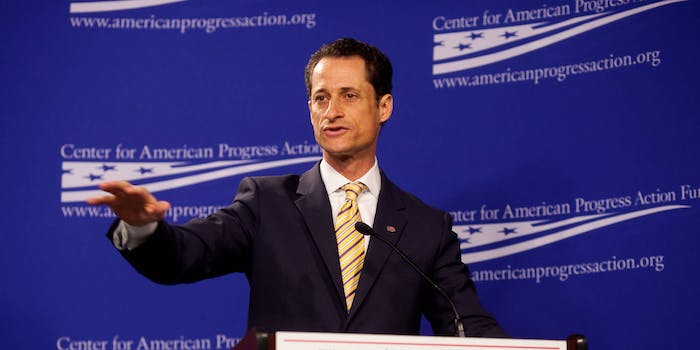 He says this is his 'rock bottom.'

Former New York Congressman Anthony Weiner has been sentenced to 21 months in prison after sexting with a 15-year-old girl.

Earlier this year, Weiner pleaded guilty to transferring obscene material to a minor as part of a deal, in an attempt to reduce the crime’s average 10-year sentence. He will have to forfeit his iPhone and register as a sex offender.

For the investigation into Weiner’s sext messages with the high school student, the FBI seized his laptop, which also contained emails between his wife, Huma Abedin, and her boss, Hillary Clinton. This led then-FBI Director James Comey to reopen an investigation into Clinton’s use of a private server to carry out official emails. Clinton credits Comey’s decision—and the subsequent media attention it received in the days leading up to the election—as playing a role in her loss to President Donald Trump.

Weiner told the judge that this was his “rock bottom. Over the years, his sexting scandals have since cost him his marriage, his service in Congress, and a bid for mayor of New York City in 2013.

“I was a very sick man for a long period of time, but I am responsible for the damage I have done,” Weiner said according to Bloomberg, weeping as he received his sentence. “I have no excuse.”