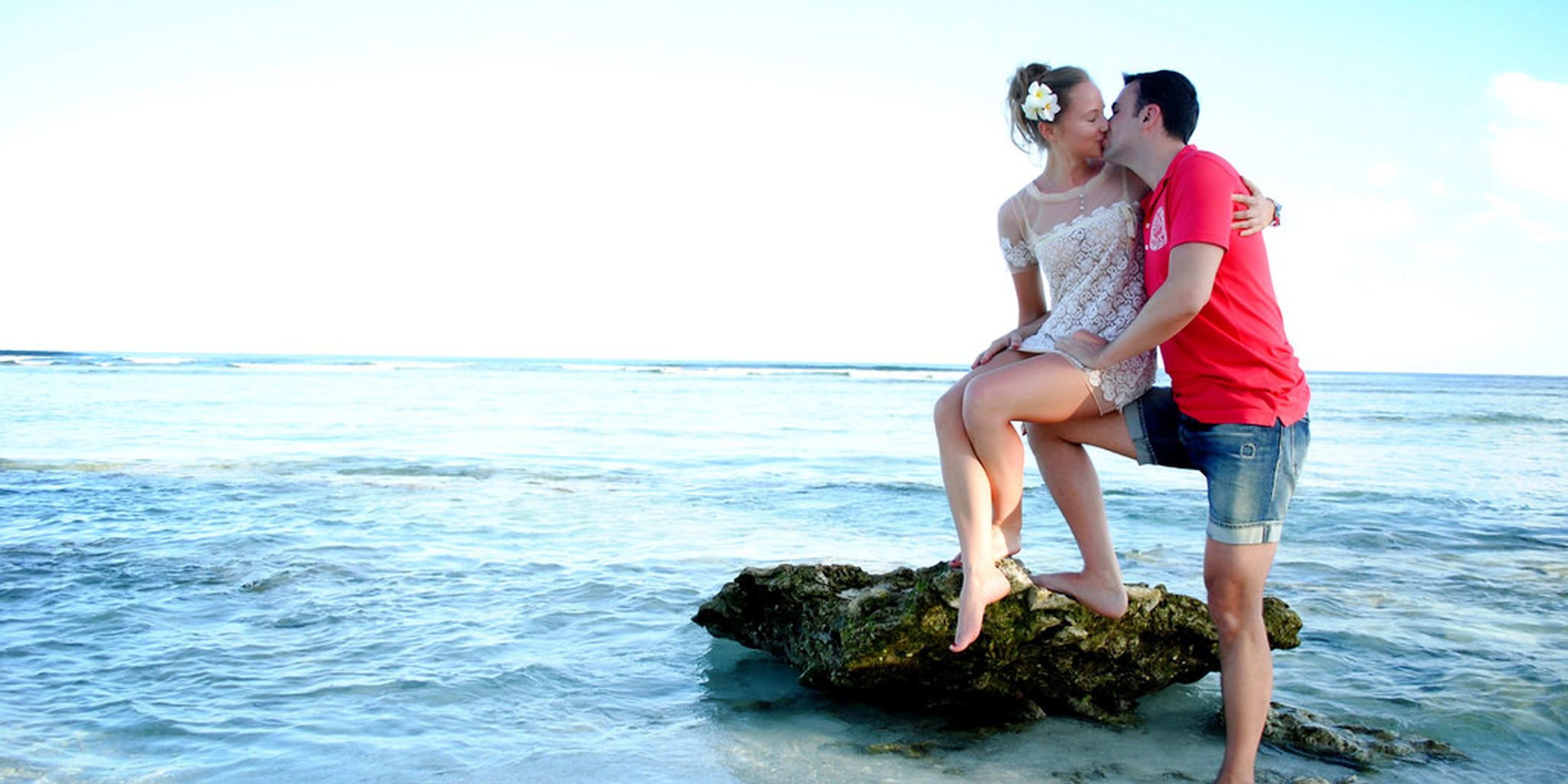 And no, none of this includes cheating.

Way back when, in the mid-aughts BCTE (or Before the Common Tinder Era), being in a relationship while the rest of your friends were single was already pretty hard. You had to serve as a perpetual wingman at bars, your stories about hookups were perpetually disappointing (“Last night I had sex with this guy, then our Asian fusion delivery came and we watched Friends whilst basking in a cloud of pad Thai farts”), and you couldn’t stay out late at parties for fear of upsetting “the ol’ ball and chain.” (Also, people liked you significantly less for using the phrase “ol’ ball and chain” unironically.)

But now, the already gaping chasm between single people and people in relationships has gotten even wider. In lieu of anecdotes about one-night stands and blind dates, your single friends swap tales of obnoxious Tinder messages and dick pics; when you’re all out at a bar, and they pull out their phones to start playing, all you can do is look on enviously while lining up your flights on Pocket Planes.

The widespread popularity of Tinder has led to the birth of a phenomenon known as Acute Tinder Envy, which is common among people in committed relationships. Fortunately for us, however, there are ways to work around Acute Tinder Envy by “playing Tinder,” ethically and on your own terms.

Here are nine ways for you to use Tinder, even if you’re in a happy, committed relationship. Sure, it’s not exactly what Tinder is supposed to be used for—”If you aren’t on Tinder to get weird, I pity you,” as one of my Facebook friends put it—but who’s to say that we should have to miss out on all the fun?

1) Tindering for an ego boost

If you’ve been in a committed relationship for three years or more, as I have, you’re way past the point of trying to impress your partner by wearing mascara and your cutest nightie to bed. In fact, you’re probably at the wearing-your-ratty-Allman-Brothers-concert-tee-flame-sweatpants-and-mouthguard stage of your relationship, because your partner is already locked in and is therefore obligated to find you sexy regardless of whether you currently look like the sewer monster from Big Trouble in Little China.

In a way, it’s kind of comforting to reach this stage of your relationship, where you don’t have to be hyper-conscious of your appearance and can just be yourself without fearing rejection or judgment. But at the same time, it’s quite common—and totally normal—to still desire some external validation that you are, in fact, considered bangable by people other than your partner.

This is where Tinder comes in. It’s fast, it’s free, and it’s an easy metric to determine how many people would bone you without having to go through the effort of tarting yourself up and parading yourself around like a peacock in heat at a sports bar. Is it psychically healthy to download an app that tells you whether dudes find you sexy, and then delete it immediately after you get confirmation in the affirmative? Nope, it definitely is not! But to quote Marvin Gaye, we are all sensitive people, and sometimes our egos, if not our genitals, need a little stroking from people other than our partners.

2) Tindering for other people

I follow a ton of fashion blogs on Tumblr—not because I have any intention of buying the clothes, but because for whatever reason, I get a vicarious thrill out seeing what they look like on someone skinnier, better-looking, and hipper than myself. The same goes for Tindering for one of your single friends, which lets you experience firsthand the joy of swiping through the endless sexual buffet that is Tinder, without actually requiring you to go through the motions of creating a profile for yourself.

It’s the laziest, most fun form of matchmaking ever. Plus, you’re doing a good deed by helping your friend get laid, so you’d get all the karma points you’d otherwise have from, say, helping her move, or teaching an elderly relative how to use Facebook over the phone.

Everyone has what I like to call a “Screw-it List,” meaning a short list of people you wish you’d had sex with in high school or college but didn’t get to for whatever reason. When you enter a committed relationship, the Screw-It List is sort of shunted to the back of your mind, along with other information you acquired in high school that is no longer useful to you, like the lines you learned in your high school production of A Midsummer Night’s Dream. Then you go on Tinder and lo and behold, there he is—No. One on your list. The course of true love never did run smooth.

If you were anything like me in high school, and you had enormous difficulty deciphering even remotely ambiguous social cues, you probably have been plagued by the eternal question: “Would he, or wouldn’t he?” The guy in your woodshop class, the lifeguard at your summer camp: Even if you have no remaining romantic interest in them whatsoever, it’s always nice to know the answer to that question. Fortunately, the beautiful part of Tinder is that there is no such ambiguity to the swipe-based system, which gives you a reliable way to determine, once and for all, the answer. 4) Tindering as a troll

There’s a well-established tradition of people using Tinder to pose as various non-humans, such as golden retrievers or even a hamburger. I myself have posed as a National Socialist on Tinder to ward off particularly sexually aggressive or creepy suitors. (Thank you, Frau Hamilton, for teaching me that semester of German in college. Or should I say, “Danke schoen,” winky face.)

Some of these trolling efforts are intended as elaborate forms of social experiment, which ultimately determine whether men on Tinder are so desperate that they’ll swipe right on every woman’s profile, regardless of whether they’re anti-Semitic, canine, or even have the ability to convert oxygen into carbon dioxide. Some of these are just trolling for the sake of trolling. Either way, it’s super fun.

While there are a handful of apps like Tinder’s 3nder and Mixxxer, which target swingers and polyamorous couples, Tinder still appears to be the app of choice for adventurous couples looking for a third wheel for their love tricycle, if the prevalence of couples’ profiles on Tinder is any indication. (True story: I have a friend who was once approached by a couple on Tinder, who offered her a free helicopter trip to their house in the Hamptons. She declined the offer, much to my chagrin. I’ve never been on a helicopter trip to the Hamptons, but I’ve heard they give you free pizza and champagne in flight. FREE PIZZA AND CHAMPAGNE! I would’ve just taken the ride, closed my eyes, let some old marrieds play with my boobs for a little bit, and called it a day.)

While there are many who would say that couples using Tinder for threesomes is sleazy and gross and runs counter to the intended purpose of the app, I’m inclined to think it’s not a bad idea: If nothing else, it solves the eternal problem of trying to find a “unicorn,” or a man or woman you’re both sexually attracted to, who is unlikely to become emotionally involved. But if you and your partner want to use Tinder to find a partner, you have an ethical obligation to clearly represent who you are and what you guys are looking for on your profile. No one wants to go on a date with one person they really like, only to go to their apartment and see that that one person has another person who really likes him as well.

6) Tindering to get free pizza

Speaking of free pizza and champagne, ditch the awkward one-night-threesome-stand with the geezers and skip to the free food part instead. People are putting their game to the test by asking Tinder matches for free pizza—and it’s actually working. The phenomenon of “The Tinder Games,” or the act of competing against other girls to see who can get a pizza delivered to them first, has mostly run it’s course at this point, but don’t let that stop you from trying. You might end up with get something even better. 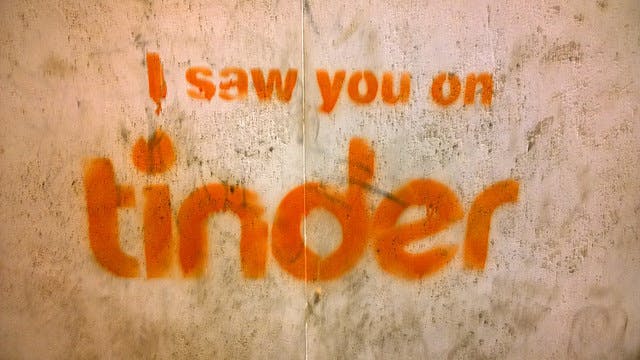 7) Tindering to get someone to buy your couch

People have actually been known to use Tinder as an impromptu classifieds section, especially if they live in a small city or college town. If you need to unload your old futon, for instance, and you think Craiglist is too scary/don’t want to shell out $15 for a spot in your local paper’s classifieds section, Tinder is free, it’s efficient, and because all the profiles connect to Facebook, it gives you (slightly) more protection against scammers than a website like Craigslist does. I know at least two people who have sold something on Tinder, and both of them swear by it.

If you’ve ever spent a minimum of, say, 10 seconds on Tinder, you’ve probably seen at least 14 profile photos of dudes dressed as Where’s Waldo for Halloween. As someone who has something of a lanky-dudes-in-horn-rimmed-glasses fetish, I’m totally on board with this (Waldo is the single hottest itinerant children’s book character ever), but it can be annoying if you’re swiping for a while and you see that every dude you’re matched with has the exact same profile photo. (For further reading on this phenomenon, see Tinder Guys With Tigers or Tinder Girls Posing At Lacma.)

I propose that we take these dudes’ lack of creativity and turn it into a game. Call it the grown-up, 21st-century version of Where’s Waldo: The Tinder Edition. Simply start swiping and see how long it takes for you to spot those telltale red-and-white stripes. (Don’t be fooled by the candy-striper or Santa Claus decoys.) When you spot a Waldo, clap and scream, “Waldo! Waldo! OMG Waldo, there’s Waldo, OMG!” Then swipe left, and begin anew.

Online activism isn’t taking place just on Twitter anymore. It’s on Tinder, where people are setting up fake profiles to spread their message to their unwitting matches. For instance, in California’s Marin County, HIV/AIDS outreach workers used fake Grindr profiles to convince matches to get tested for the disease, and the AIDS Task Force also used Tinder as a platform to raise HIV/AIDS awareness (though the campaign did not actually appear on the app). A fictional woman called “Nurse Nicole” also popped up on Tinder in 2013, urging matches to get prostate exams.

While it’s not necessarily the most subtle or even ethical way to get the message across, however valuable it might be (imagine what a boner kill it is to message someone looking for sex, only to get an automated reminder to provide your doctor with a stool sample), considering that Tinder makes millions upon millions of matches a day, it very well might prove to be one of the more effective.