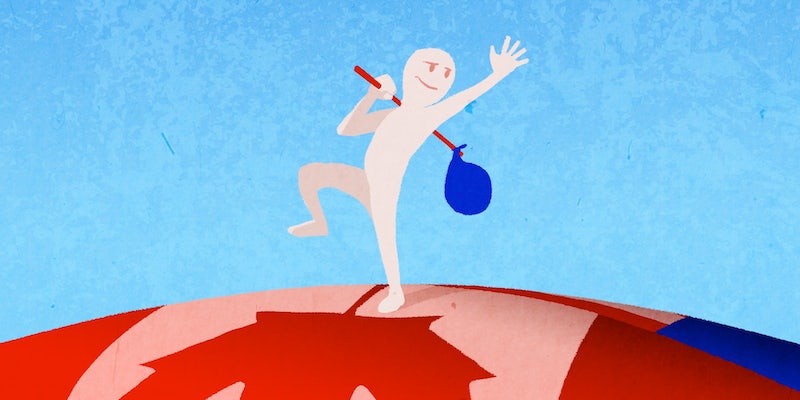 How to move to Canada to escape the Trump administration

Our neighbor to the north is looking pretty good right now.

You’re not the only American weighing a move up north to escape the Trump administration. If anything, you’re a bit late to the game. Following Trump’s domination of Super Tuesday, Google saw a 350 percent spike in searches for variations on “How can I move to Canada” in the United States.

Searches for "Move to Canada" are higher than at any time in Google history #SuperTuesday pic.twitter.com/0KBJPrHdEO

The Daily Dot reached out to the people who run the Government of Canada’s immigration website, and they confirmed a similar surge in traffic. It received more than 67 thousand sessions from American IP addresses on Super Tuesday, which was a 41 percent increase from the previous Tuesday. 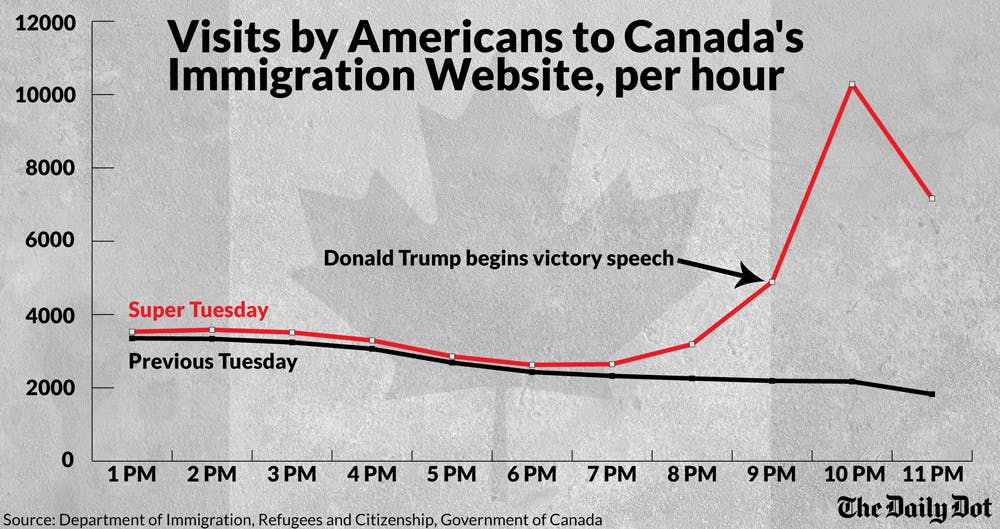 Super Tuesday may have been the first peak of the ‘move to Canada craze,’ but the temptations has only intensified in recent weeks.

From draft-dodgers to those seeking better healthcare to Hollywood celebrities like Susan Sarandon, Canada seems to be the refuge of choice for Americans unhappy with the current political landscape. The United States was the sixth largest source country for Canada’s permanent residents in 2014, with over 8,000 Americans deciding to settle down in the Great White North.

So how do you move to Canada as an American? It’s not easy, but it is possible.

The basics of moving to Canada

First things first: Get familiar with the Government of Canada’s immigration website, which you can visit here. Run by Canada’s Department of Immigration, Refugees and Citizenship; this is where you’ll go to apply online for a work or study visa, a permanent resident card, and even Canadian citizenship. Make sure you meet the Canadian government’s eligibility criteria to apply for permanent residency. Are you a U.S. citizen who speaks English fluently with no criminal record to speak of? You’re probably in pretty good shape to come to Canada.

Canada’s immigration process is different from the United States’ in that it prioritizes labor skills rather than family ties. For new immigrants, the Canadian government takes into account factors such as language proficiency, education, and work experience using a point-based system. An estimated 60 percent of Canadian permanent residents are granted access to the country in this way.

In other words, if you don’t have an aunt in Toronto but do happen to have a bachelor’s degree in supply chain management, you’re in luck. The Canadian government launched a new system in 2015 to expedite the permanent residency process for highly skilled immigrants called Express Entry. The processing time is six months or less.

While Canada’s immigration website notes that you don’t need a job up offer from a Canadian employer to get approved for Express Entry, it’s a “significant asset.” Candidates earn more points if they have a job offer in hand, skills that are  in-demand in Canada’s job market, or are nominated by a province or territory. CBC noted that virtually all candidates who were invited to become permanent residents had job offers or were nominated by a province. You can learn more about Canada’s Express Entry program here.

Get hired by a Canadian Employer

Not sure you’re ready to take the leap and become a full-time, permanent Canadian? Getting hired by a Canadian employer through their Temporary Foreign Worker program or attending a graduate school in Canada is another option.

Apply for a work visa

Canada’s temporary work visa lasts for four years, which, conveniently, is also the length of a presidential term. But in the event of Trump winning the election and his presidency carrying over to the year 2024, you won’t be able to renew your temporary worker’s permit for another four years. So in that case, just buck up and apply for a more permanent option.

Luckily, all graduates of Canadian institutions of higher learning are considered for permanent resident status in Canada.

Figure out what you’ll do in Canada

Canada is the world’s second largest country behind Russia in terms of landmass, but it is also very sparsely populated, with much of the population concentrated in the lower region. If solitude is what you crave, this may be a blessing. If you’ve always been fascinated with the Northern Lights and the Klondike Gold Rush, why not try settling somewhere in the Yukon?

Canada is also host to some incredible, vibrant cities such as Montreal, Vancouver, and Toronto. Vancouver, which hosted the 2010 Winter Olympics, is the place to go if you’re an avid skier or snowboarder. Toronto is the birthplace of Drake and home to some incredible culture, nightlife, and shopping. It’s also only a 90-minute drive from Niagara Falls. What are you waiting for?

A quick Google News search for Montreal reveals that it may be one of the best places on Earth. 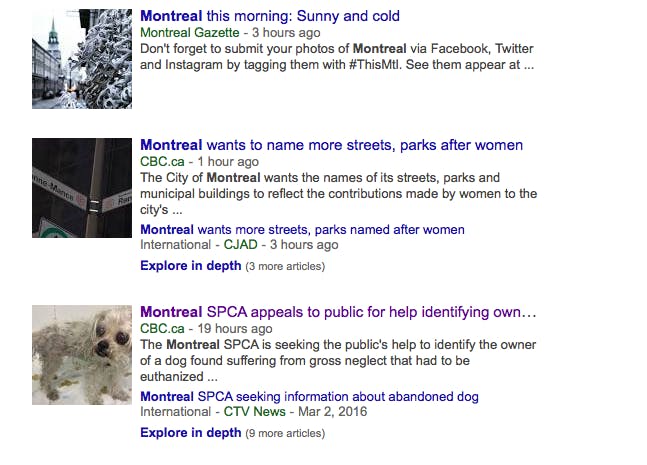 But if cities or the French language isn’t your thing, there are plenty of other options. The cities of Saanich and Delta, both in British Columbia, are the two best cities for new immigrants. Both have unemployment rates of less than 5 percent and the average rental price of a one bedroom is around $1,000 Canadian (about $750 American) per month. A search for “Delta, British Columbia” on Instagram reveals that its inhabitants enjoy selfies, yoga, and farmhouses. Sign us up!

After all of this, if you still want to pack up and ship off, we wish you luck. Just pack a coat.

Illustration by Max Fleishman and graph by Jason Reed