How to get rid of messaging app read receipts

The read receipt can be a cruel mistress. Here's how to dump it.

It’s nearly impossible to avoid read receipts in messaging apps. It can be handy to know when people are interacting with messages, but sometimes it’s more trouble than it’s worth. It creates extra anxiety when someone doesn’t reply upon reading and extra pressure to respond right away. Adblock Plus recently came out with a new Facebook solution to the issue, but clearly there are many more messaging apps wreaking their havoc.

We want to take back the right to ignore people. If you too want to free yourself from the tyranny of read receipts, here is your complete guide to ridding them from your digital life. 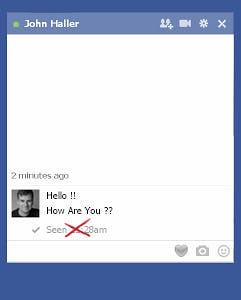 Facebook is dictatorial about its messaging services. Earlier this year, it twirled its moustache as it forced mobile users into downloading its Messenger app if they ever wanted to see their precious messages again. The social network also hasn’t looked back since adding read receipts in 2012, leaving users with no official outlet for removing the notification.

On desktop, working around the “Seen” message is easy. There’s a handful of options at your disposal.

Adblock Plus: The favorite content blocker of the Internet recently added the ability to block read receipts by using a custom filter. Available for five major browsers, it’s most widely used option capable of this task. Users can visit Adblock’s site to activate it or add the following URL to their block list: facebook.com/ajax/mercury/change_read_status.php$xmlhttprequest

FBUnseen: For Chrome users, blocking read receipts is simply a matter of adding this Chrome extension. It also has the handy feature of manually marking messages as read.

Unseenly: Unseenly is fighting Facebook from the inside. The Facebook app disables read receipts once installed on your Facebook account. Note that you won’t be able to see threaded conversations in the app, just the most recent message. Full conversations are only viewable in your normal messages menu.

Social Reviver: A plugin available for Chrome, Firefox, and Opera, Social Reviver disables all sorts of social media annoyances and lists the ability to obscure read receipts as an “experimental feature.” 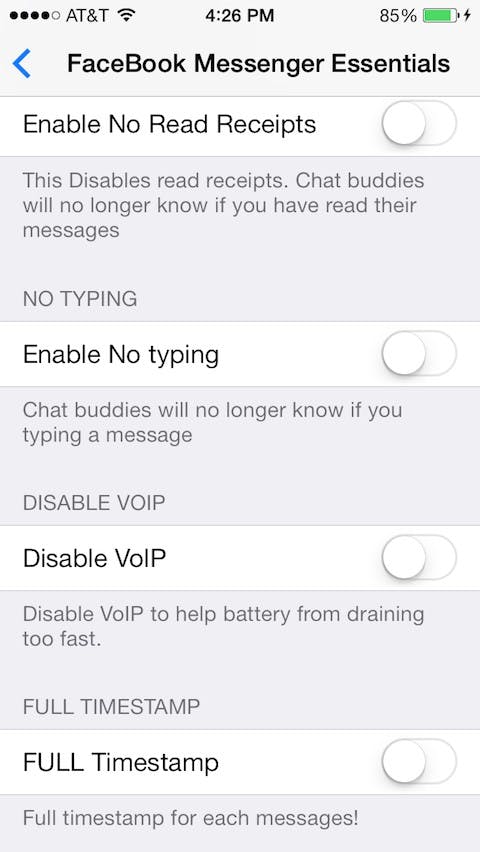 The Facebook Messenger app is quite a bit trickier. Adblock Plus exists on mobile but it doesn’t have any effect on Messenger. There are a couple options out there.

Privy Chat for Facebook: Available for most Android devices, Privy Chat allows you to read Facebook messages through the app without marking it as read. It doesn’t currently work with group messages.

Facebook Messenger Essentials: On a jailbroken iPhone, you can use this tweak to hide read receipts and the typing notification.

For any of these workarounds, you’ll have to turn a blind eye to Facebook’s terms of service, which state, “You will not do anything that could disable, overburden, or impair the proper working or appearance of Facebook, such as a denial of service attack or interference with page rendering or other Facebook functionality.” That’s pretty much exactly what all these things do, so just keep that in mind. 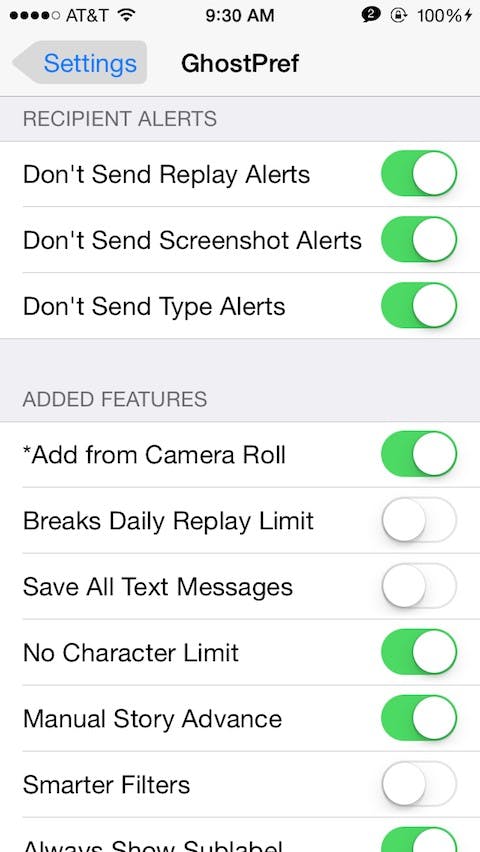 Read receipts are ingrained into the foundation of Snapchat. You can no more disable them than you can the timer. Blocking the read receipts requires a jailbroken iPhone and one of the following tweaks.

GhostPrefs: This service gives you complete control over Snapchat and allows you to disable all sorts of alerts including the pesky read receipt.

Phantom: Another option for hiding the “Opened” message among other things, though it’s also for saving pictures (which you shouldn’t do if the sender doesn’t want you to).

PicArchiver: For those still clinging to older versions of iOS, PicArchiver gives users control over whether or not read receipts get sent and, as you may have guessed, allows you to save pictures.

WhatsApp recently added a third step to its dual checkmark system, displaying one checkmark for sent, two for received, and now highlighting the marks in blue when read. It’s been an ongoing battle between WhatsApp and its users, with the new “Seen” indicator creating an uproar that has led to the promise of an update that will provide a toggle option. It’s not available yet, so here’s what you can do in the meantime.

Android Beta: It’s a pretty simple solution for Android users; Get the beta version of the app and you’re set. You can download it from the WhatsApp site or get the APK. Make sure you’re getting version 2.11.444 or later. Then head to the Settings, Account, and select Privacy. There will be a check box you can select for read receipts.

WhatsApp Read Receipt Disabler: Users on iOS will have to jailbreak their device and grab this tweak that does exactly as its title suggests.

Don’t want read receipts in Apple’s Messages or iMessage? Just don’t turn them on–they are off by default. If you’ve managed to accidentally turn them on, or thought they’d be a great idea and now regret the decision but don’t know how to rectify it, it’s pretty easy.

iOS: Open Settings, go to Messages. Find the read receipts toggle and turn it off.

Mac: Open Messages, go to the Messages menu, click Preferences and then Accounts. Look for the “Send Read Receipts” box and uncheck it.

Viber is another app with a straightforward solution for the read receipt problem. Head to the Menu, then select Settings and go to Privacy. Make sure the box is unchecked next to “Show ’Seen’ Status.” 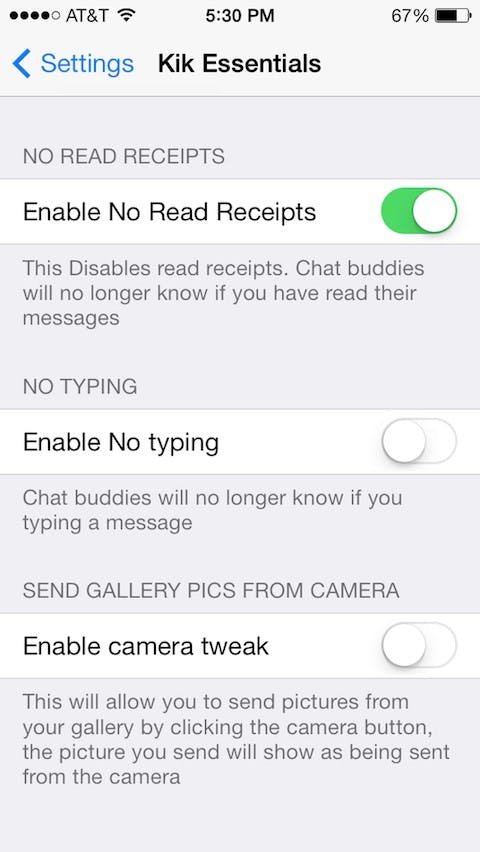 There is no built-in option for turning off the read notifications in Kik. Once again, you’ll have to turn to a jailbroken iOS device to do away with the checkmark.

Essentials for Kik Messenger: This tweak is dedicated to making Kik Messenger more private. This includes turning off the typing notifications as well as read receipts.

Telegram picked up a fair share of users after a WhatsApp outage and privacy concerns surrounding the biggest messengers. The end-to-end encrypted messaging service features self-destructing messages and plenty of other privacy-centric features, but it still has read receipts. You can get rid of it on jailbroken iPhones.

Telegram LSTimeStamp: Read receipts and other indications about your online status are hidden by this app.

Once the king of the messengers, BBM fell behind along with the phones that make it popular. It jumped ship to Android and iOS a little too late to maintain its success, but it’s still hanging around. If you’re one of the people still making use of BBM, you can at least stick around on your own terms and get rid of read receipts.

BlackBerry Phones: If you’re still on a BlackBerry device, open up Messages and open the Options menu. Find “Email Preferences” or “Email Settings”—it will vary based on your model of phone. Set both the “Send Read Receipt” and “Send Delivery Receipt” fields to “No.” Do the same for the “Confirm Delivery” and “Confirm Read” fields.

For iPhone users, you’ll need a jailbroken phone. Then try one of these tweaks:

BOptions+: This tweak tackles a considerable amount of BBM features, chief among which is the ability to hide your receipt receipts.

HiddenBBM: HiddenBBM blocks your typing status and your read report from being displayed.