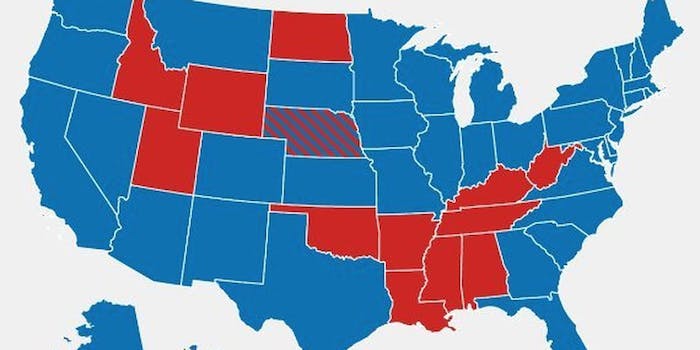 How to switch your early vote to a different candidate

Not everyone is feeling great about their vote for president.

Google searches for “change early vote” began to surge on Halloween weekend and reached their highest on Wednesday, less than six days before Election Day.

Most alarming is that the search interest is virtually all concentrated in battleground states like North Carolina and Florida as well as states that are considered to be solid or “likely” for Republican presidential candidate Donald Trump, including Louisiana and Arkansas. Searches are the highest in Tennessee, a “likely” Trump state whose early voting deadline is Thursday, Nov. 3.

Wisconsin—a state considered to be “leaning” towards Democrat Hillary Clinton—does appear second on Google’s list of states where the search term “can you change your early vote” appears the most. But the vast majority of states where the search term is highest are states that favor Trump. This includes four states: Kentucky, Kansas, Oklahoma, and Arkansas, which are all considered “solid” Trump states. 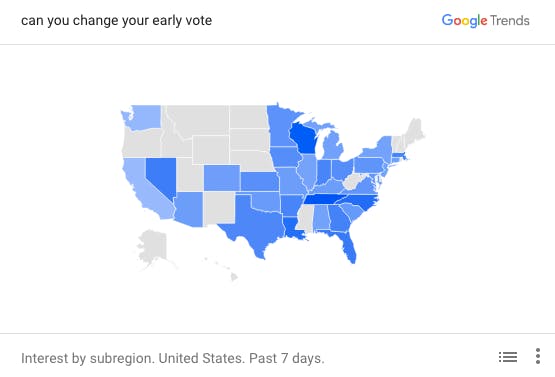 It’s hard to interpret what exactly is happening here. The New York Times reported on Halloween that over 22 million ballots had already been cast, with early vote turnout higher among Hispanics across all states but lower among African-Americans than it had been in 2012. Less than 72 hours earlier, FBI Director James Comey‘s revealed to Congress on Friday that the agency was investigating over 650,000 e-mails found on a laptop shared by Clinton aide Huma Abedin and husband Anthony Weiner, as part of a probe into alleged sexual misconduct between Weiner and an underage girl. Nationwide polls released on Monday and Tuesday showed the race tightening further—it had already begun to tighten before Comey’s news—and a Washington Post/ABC News tracking poll released on Wednesday showed both Trump and Clinton in a dead heat.

A consequence of increased availability of early voting may be that more people are changing their vote.

Where people are curious about changing their votes

A look at Google Trends shows this trend began on Oct. 29—the day after news of Comey’s letter to Congress broke—and hit a high on Wednesday, Nov. 2: 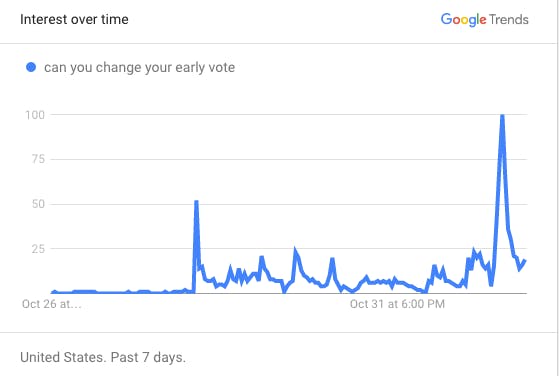 The 25 states that Google Trends ranked the search term “can you change your early vote” to be the most popular are below. Also included next to them is whether they’re considered to be toss-ups, leaning, likely, or solidly towards Clinton or Trump.

Google Trends ranks interest by subregion by looking at the proportion of total searches in that state to its population, not the actual number of all searches. In other words, more people may have Googled “can you change your early vote” in Florida than in Wisconsin, but since Wisconsin has a smaller population it appeared higher on the list.

Trump has encouraged those who early-voted for Clinton who regret their decision to change their vote. But here’s the clinch. Not all states allow ballot changes. And of the states that appear on the top five of the Google Trends list, only Wisconsin permits voters to change their ballot once they’ve already voted.

Which states allow voters to change their early vote?

Only voters in six states: Connecticut, Michigan, Minnesota, Mississippi, New York, Pennsylvania and Wisconsin are allowed to void their early or absentee ballots and cast a new vote. Of those six, Michigan, New York, and Mississippi don’t even appear on Google’s list.

How to change your early vote

Minnesotans are no longer allowed to change their minds—the deadline passed on Tuesday. Pennsylvanians can change their absentee ballots as long as they show up in person on Election Day.

Finally, Wisconsinites are required by state law to be allowed to vote and cancel their ballots up to three different times.

While Michigan does not offer early voting, those who voted early by absentee ballot can pick up a new absentee ballot from their local clerk’s office by 4pm CT on Monday, Nov. 7.