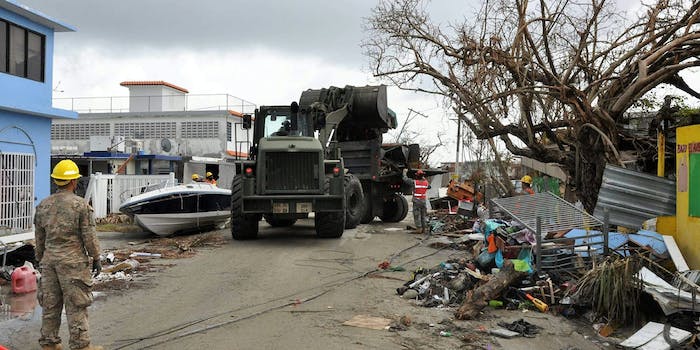 Photo via The National Guard/Flickr (CC-BY)

The House voted 353 to 69 to pass the bill, with only Republicans voting 'no.'

The House of Representatives overwhelmingly passed a $36.5 billion disaster aid package to help victims of recent natural disasters and give emergency credit to Puerto Rico as it reels from the devastating effects of Hurricane Maria.

The bill passed 353 to 69 and will head to the Senate for a vote after it returns from a week-long recess. Republicans cast all 69 “no” votes.

Originally, the package included $29 billion in funding, but it was raised to fund a loan program for Puerto Rico to address “basic functions” in light of Hurricane Maria, according to CNN.

In addition to Puerto Rico, the money in the bill would also help areas hit by hurricanes in recent months–Florida, Texas, and the U.S. Virgin Islands–and would also help people in California who have been affected by raging wildfires.

The move comes on the same day that President Donald Trump slammed Puerto Rico on Twitter despite a vast majority of the island territory still without electricity as a result of the storm.

Trump said there was a “total lack of accountability” in Puerto Rico and–somewhat ominously–said the United States would not keep “FEMA, the Military & the first responders… in P.R. forever!”

As of Thursday evening, only 10.6 percent of Puerto Rico had power, according to the Puerto Rican government, and 64 percent of people had access to drinking water.

You can see a full tally of which members of the House of Representatives voted for, or against, the bill here.