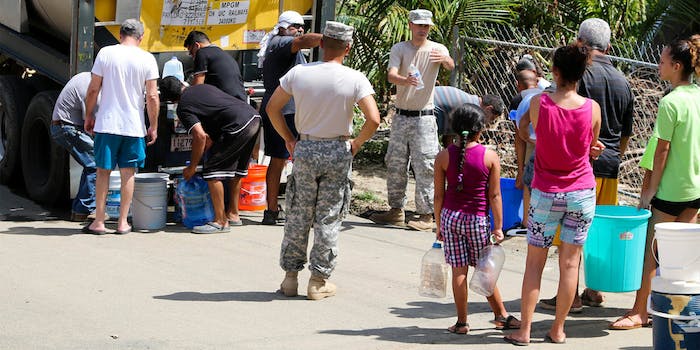 Photo via The National Guard/Flickr (CC-BY)

The latest dispatches from Puerto Rico are dire.

Following closely on the heels of Hurricane Irma, the category 4 tropical storm that tore through the island earlier this month, Hurricane Maria made landfall in Puerto Rico on Wednesday, killing at least 13 people and knocking out power to the entire island. The outage alone posed one of the greatest threats to Puerto Rico in the storm’s immediate aftermath, making it difficult for many stranded residents to alert rescue teams and thwarting local officials’ attempts to reach the island’s central government.

With the island-wide power outage reportedly to last as long as six months, Puerto Rico will continue to struggle on its path to recovery. The dearth of electricity means residents will have a hard time accessing water supplies for drinking and bathing. And while generators might currently serve as a plan B, a looming gasoline shortage could soon render them useless.

Rebuilding the rest of the island’s infrastructure is also slated to be a gargantuan task. According to CNN, Maria’s torrential rainfall has washed away entire roads or blocked their paths with debris. On Friday, a dam that seemed to be on the verge of collapsing prompted an order for the mass evacuation of 70,000 people. Though it’s expected to hold, Hurricane Maria has left it with a “fissure” and a “partial breach,” according to USA Today.

Puerto Rico has a complicated and widespread web of need right now. As the federal government deploys FEMA and the U.S. Army Reserves to the island nation, here’s where your own resources could best serve its residents:

ConPRmetidos is an independent, nonpartisan nonprofit that has, as of this writing, raised $369,577 for Puerto Rico—100 percent of which will go toward “long-term relief” for Hurricane Maria’s victims—in collaboration with Foundation for Puerto Rico.

The organization has also established a partnership with Connect Relief, a site where residents can share their needs as they arise. That means the organizers at ConPRmetidos aren’t just assuming what kind of help communities need—the communities are telling them.

The first lady of Puerto Rico, Beatriz Rosselló, launched the Unidos Por Puerto Rico relief fund in collaboration with the private sector for victims of hurricanes Irma and Maria. Organizers behind several other fundraising and relief efforts have plans to funnel money into Rosselló’s fund, like Jose Toro, the University of Pennsylvania student behind the Students with Puerto Rico GoFundMe page. Toro, along with students from more than 50 colleges across the U.S., has raised over $23,000 for the cause, with hopes to meet a $50,000 goal.

Toro told the Daily Dot via email that he and a few of his UPenn friends began working on the fundraising campaign Wednesday night, cold-calling as many of their friends across as many college campuses as possible to get them on board. For these Puerto Rican students in the U.S., organizing a relief fund has been a way to channel their grief and feelings of powerlessness into action.

“It’s been extremely difficult, numbing and devastating,” he wrote. “It’s especially hard when you’re surrounded by people who are carrying on as normal, when for us, our homeland is destroyed … This fundraising, for me (as I’m sure it has been for many others), has been a coping mechanism for all of these feelings.”

If you’re based in any of the city’s five boroughs, you can visit any of the 18 designated firehouses and EMT stations to drop off some of the items residents in Puerto Rico need most right now: diapers, baby food, batteries, first aid supplies and sanitary products. As HuffPost noted in its reporting on the aftermath of Hurricane Harvey, both emergency shelters and disaster relief organizations often fall short of providing some of these hygienic items.

The initiative is part of statewide efforts to send aid to the island. According to the New York Times, Gov. Andrew Cuomo announced on Saturday the creation of the Empire State Relief and Recovery Effort for Puerto Rico.

“It’s going to be a long road to recovery, but New York is going to walk that road with you every step of the way,” Cuomo said.

The Puerto Rican community in Los Angeles is coming together in the wake of Hurricane Maria. The organizers behind Puerto Ricans in Action—a group that formed in 2016 amid protests against the Senate bill that established a control board to oversee Puerto Rico’s debt crisis—have partnered with six L.A.-based businesses to raise hurricane relief funds.

According to the coalition’s GoFundMe page, organizers will close the campaign on Oct. 7, dividing the money it raises among ComPRmetidos, Iniciativa Comunitaria, Fundación Comunitaria de Puerto Rico, and the United Way of Puerto Rico. (Donating directly to any of those organizations works, too.)

Again, 100 percent of the proceeds will go to helping hurricane victims in Puerto Rico.

“The devastation wrought by Hurricane Maria will only be compounded by the ongoing economic and financial crisis already afflicting Puerto Rico. Puerto Rico faces challenging times ahead, but I am confident that the indefatigable spirit of the Puerto Rican people will allow the Island to persevere,” Velázquez, the first Puerto Rican woman to be elected to Congress, said in a release on the Hispanic Federation’s site.

“In the interim, the federal government has a moral obligation to provide assistance, and I will continue working to ensure every appropriate tool is utilized to help alleviate this crisis.”