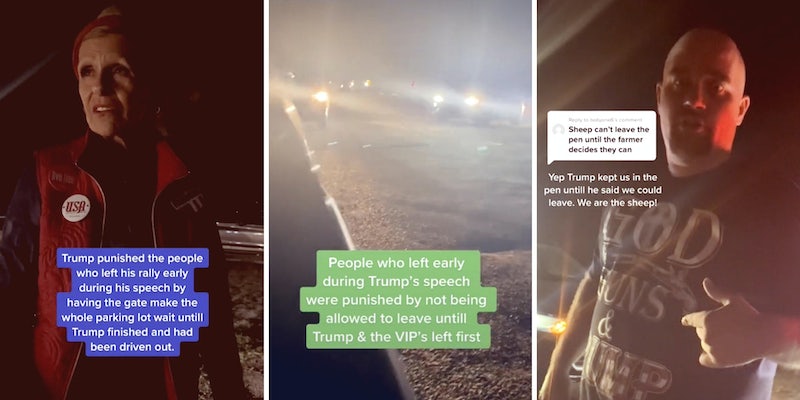 Social media was filled with claims about long wait times at Trump's rally.

Former President Donald Trump’s return to the rally stage on Saturday night featured a typical airing of grievances and lies about election fraud and the pandemic.

That’s the show people came for, and the thousands who attended the Trump rally in Arizona were thrilled to see it. The enjoyment was spoiled for some, however, when they attempted to leave and were forced to wait hours in the parking lot.

Social media is awash with claims that people weren’t allowed to leave until Trump departed. Viral TikToks and tweets show long lines of cars and complaints about waiting hours in the parking lot.

The Arizona Republic reported: “Though people attending the event left happy, when they got to their cars their mood may have turned sour. Many people leaving the venue had to wait more than an hour before they could exit the dirt parking lots and get on the road.”

The departure delay followed similarly long waits to get into the event, which is only accessible via a single two-lane road.

This isn’t the first time people have complained of long waits to leave a Trump rally. During the 2020 campaign, hundreds were forced to wait hours in freezing temperatures after a campaign event in Nebraska, the Hill reports.

TikToker @special_head spoke to people waiting to leave the Arizona rally. Some reportedly waited as many as three hours. One woman claimed that they couldn’t leave until Trump did because the Secret Service needed to keep the road secure.

A man wearing a “Gods Guns & Trump” shirt angrily told the TikToker: “The Secret Service can go fuck themselves. And fucking know how do their job right.”

“This is bullshit. I’ve never had my freedom restricted like this in my life,” a woman in a red vest with a USA pin on the lapel told the TikToker.

“And of all places for it happen. My first Trump rally.”

The woman said that they’d left early in an effort to beat the traffic and planned to stream the rest of the speech. More than two hours later, and an hour after Trump’s remarks concluded, they were still waiting to leave. She said that Trump, vendors, recreational vehicles, and others were allowed to exit before the general attendees.

“I’m an attorney. This is false imprisonment,” she said. “…They’re treating us like commoners. Let all the VIPs go first and who cares about the little people.”

A caption on the TikTok claims that the parking lot had no bathrooms.

Another of special_head’s TikToks from the rally includes the unverified claim that some women peed themselves during the wait. The TikTok has nearly 1.5 million views as of this writing.

“HELD HOSTAGE AT TRUMP RALLY,” a Twitter user wrote of the delay. “What a way to treat your supporters.”

But it wasn’t just TikTok. Claims of miles-long lines of traffic to enter and exit the rally are also circulating on Twitter.

Estimates of the length of the line of cars range from five to 25 miles. During his speech, Trump himself made the latter claim, which some dispute.

Even people who were apparently satisfied with the event described the traffic jam and waiting hours in the parking lot.

The rally was the first since Trump lost his reelection bid. Trump’s planning another rally in Texas later this month.