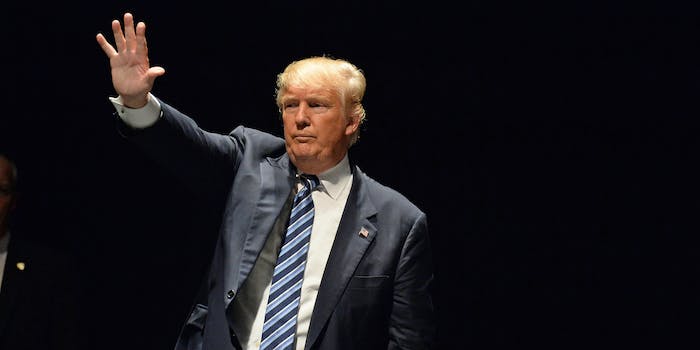 Even one of the other defendants blames Trump.

Facing a lawsuit filed by three protesters who accused Donald Trump of inciting a Louisville, Kentucky, crowd to handle them roughly during a campaign rally in March 2016, the president’s lawyers argued in a court filing that the protesters were actually infringing on Trump’s constitutional rights.

The lawyers have said that Trump’s call for protesters to be thrown out of the rally were protected by the First Amendment, but a federal judge rejected that defense late last month and ruled that discovery for an upcoming trial could go forward. Trump’s legal team also has said the protesters purposely tried to provoke Trump.

At the time, Judge David Hale of the United States District Court for the Western District of Kentucky wrote, “It is plausible that Trump’s direction to ‘get ’em out of here’ advocated the use of force. It was an order, an instruction, a command.”

Trump’s lawyers on Thursday asked the judge to stop the move toward a trial so they could appeal Hale’s ruling to a higher court.

Meanwhile, one of the men who was accused of assaulting the protesters has filed a suit in which he claims his actions were “pursuant to the directives and requests of Donald J Trump” and said Trump should be held financially responsible if the accused were to be penalized.

At an Iowa rally in early 2016, Trump told the crowd to “knock the crap out of” anyone seen throwing a tomato, based on rumors that some planned to do so. He also said he would pay the legal fees of anyone who followed his request.

“So if you see somebody getting ready to throw a tomato, knock the crap out of ’em, would you? Seriously. Okay? Just knock the hell—I promise you, I will pay for the legal fees,” Trump said. “I promise. I promise.”