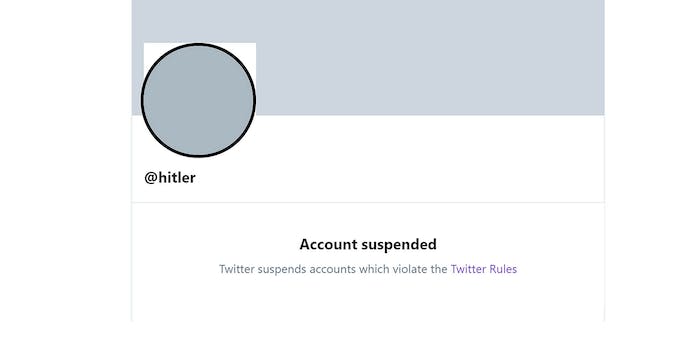 Not now of course. That question has been answered.

Twitter is rife with neo-Nazis and fascists who love to make memes about the Holocaust and call for ethnic cleansing. If Hitler somehow rose from the dead, grasped the concept of the microblogging platform, and started firing missives under @realadolf, he would be able to.

But what if it were 1938 in Germany, on the eve of World War II, and Hitler was in charge of Germany?

The question comes in the wake of Twitter’s recent policy that hate speech—as well as other posts that violate its terms of service—may result in getting dinged a few faves.

The new policy is that speech from world leaders will be left up on the site, but users will not be able to retweet or share it so that the spread of the message is mitigated.

We haven’t used this notice yet, but when we do, you will not be able to like, reply, share, or Retweet the Tweet in question. You will still be able to express your opinion with Retweet with Comment.

So the question kind of answers itself, but nevertheless led to some fun speculation online after the question was posed.

When one woman posted the thought experiment, a response of “Maybe if Hitler had been on twitter his ideas could have been countered and discredited in the open” garnered attention.

It led to jokes about how a few “Hitler is canceled” quote tweets could have won the war before it even began.

Thinking about a world where Nazism was destroyed because Hitler posted some bad tweets and got ratioed by people telling him this ain't it chief pic.twitter.com/TOWWlSirGL

Hitler: I will gas ALL the Jews
Twitter: Hitler, you’re CANCELLED! PERIODT

And just like that, Nazism was no more https://t.co/aAwrlkt394

Or would he have never gained a following because of how bad his art was?

When reached for comment about Hitler potentially being allowed on Twitter, a spokesperson pointed the Daily Dot to their policies on “hateful conduct” which say that Twitter prohibits “the dehumanization of a group of people based on their religion.”