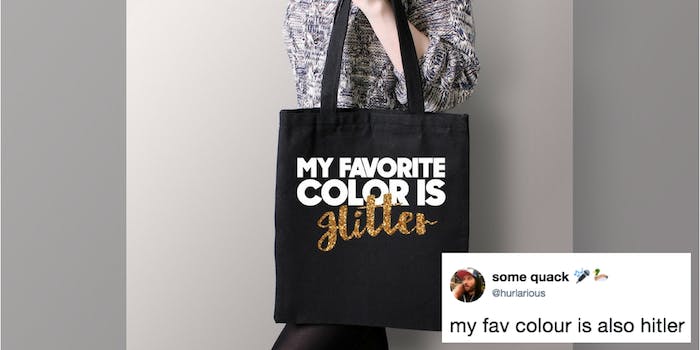 Your favorite color is what, now?

Graphic design can make or break the success of a product.

Or, in this case of a tote bag that appears to say, “My favorite color is Hilter,” it can really fucking shatter it.

On Sunday, a Twitter user from Vancouver noticed such a bag on fashion deals website BelleChic and decided that, nope, this bag does not say, “My favorite color is glitter.” Instead, it stans for one Adolf Hitler.

“My fav colour is also Hilter,” the tweeter shared, pointing out how the flawed, thick lettering in “glitter” made the bag prime pickings for white supremacists looking to flash their hate in style.

We just talked about this on air…
people are mad–they think this "glitter" reads more like "Hitler".. do you see it? @nbc6 pic.twitter.com/ia1Au0loQk

The designers chose a bad font…the word is glitter, but it looks like Hitler. https://t.co/4rtL6BxQmL

The tweet did spark its share of Holocaust puns, which, to be clear, are still completely inappropriate regardless of the bag’s ridiculous appearance.

How did the designers Nazi that

They probably did… Anne Frankly I think they did it on purpose.

Hitler is the new black pic.twitter.com/N3tPJTn2DD

Nein out of ten agree.

But responders also brought up a great point: how in the hell did the company who created the bag, Quotable Life, manage to approve the bag, or did the designers create an anti-Semitic bag that seemingly flies under the radar on purpose?

The q. is: did they agree on a deliberately ambiguous design to create controversy or to strut their anti-semitic stuff and still hide?

One day after the revelation, BelleChic pulled the bag and issued an apology on Twitter, revealing a new design that unambiguously cheers for “glitter” instead of “Hitler.” Quotable Life, the merchandise company responsible for creating the bag, has also updated the design.

According to the cached page of the website, more than 70 bags were sold before the “Hitler”-looking product was pulled, meaning that several people may one day get stopped on the street by folks thinking their favorite color is that of a Nazi.

However, the new bag hasn’t stopped a few particular (read: ill-intentioned) people from asking if the old bag is still being shopped around.

wait do you still have the old ones for sale?

Matt Molen, Chief Marketing Officer for BelleChic, responded to the controversy in a statement to Allure.

“While I realize that most of the social media buzz and commentary has been tongue-in cheek, the type of abhorrent sentiment conveyed as part of the misinterpretation absolutely does not align with our company values, nor is it something we would ever want to encourage or support,” Molten said.

Quoteable Life did not immediately respond to a request for comment.

Update 1:49pm CT: A representative from Quotable Life sent the Daily Dot the following statement. The company said the bag had been designed three years prior, and that it will donate 300 percent of the funds from the sales of the discontinued tote bags to the National Holocaust Museum.

“To anyone who saw our tote bag blunder, I want to say I am so sorry for any unintended reference seen in our design. We made a mistake when designing this 3 years ago, plain and simple. After almost 20 years of being a designer, I still make mistakes. Sometimes you look at something so long, that you don’t see it with fresh eyes. To demonstrate our commitment to running a clean, family-oriented business based on respect for all, we are donating 300% of all proceeds ever received from the sale of our discontinued glitter tote bag to the National Holocaust Museum in Washington, DC.”