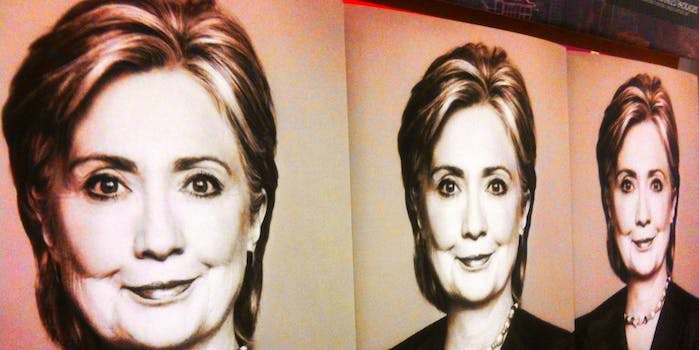 How does it make you feel? Like on the inside, where your feelings live?

Does its warning of Democratic presidential nominee Hillary Clinton‘s impending “Vagenda of Manocide” make you squint your eyes, take a somehow extremely masculine pull on your vape, stare off into the middle distance as if you were Clint Eastwood, and mumble in a near-audible whisper, “We do need to make America great again”?

Or does everything about the sign—from its use of the non-gendered pronoun “it” when referring to “Hildabeast Clinton” to how the words “of Manocide” aren’t even centered—fill you with the combination of rage and disappointment that’s become the ongoing emotional soundtrack to your experience of the 2016 election cycle?

If you answered the former: neat! We’ll keep that a secret just between us friends. You’re welcome. Vaping is still probably going to kill you.

If you answered the latter, here’s some good news: when life gives us vagendas, the internet always knows how to turn them into vagendanade.

Pictures of the billboard—which was put up by Gulf of Maine Gunsmithing in Raymond, Maine—went viral on Wednesday, with people on Twitter collectively agreeing that “Vagenda of Manocide” would be a great thing to call a feminist punk band.

However, within hours of Clinton’s liberal vagenda being uncovered, someone had taken the logical next step in turning that vagenda into a reality. The web address http://www.vagendaofmanocide.com now redirects to the donation page on Clinton’s official campaign website.

Whoever registered the domain used a private registration service as a way to stay anonymous, so there’s no way of knowing who they are or what their real vagenda is. It’s probably safe to assume they’d like to see a Hildabeast finally break the glass ceiling in the Oval Office.

The Clinton fundraiser isn’t the only way the “Vagenda of Manocide” meme is being used to ends that are likely the exact opposite of the conservatism regularly espoused by the Gulf of Maine Gunsmithing sign throughout the years.

This is how politics is conducted in the world’s oldest continually functioning democracy in 2016. Neat!