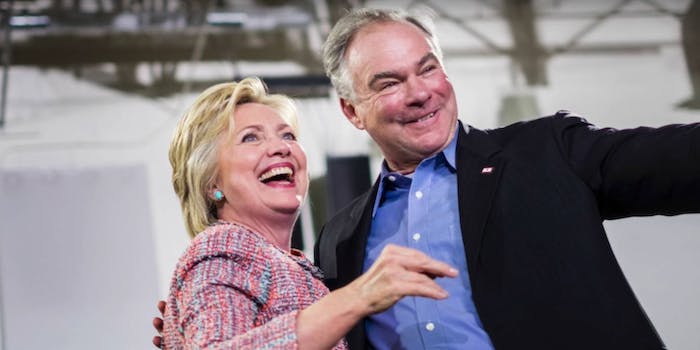 Screengrab via The Humanist Report/YouTube

Kaine gave an impassioned speech at the Miami rally.

Despite getting off to a late start, Clinton spoke with confidence at Florida International University with Kaine by her side. The event marks the duo’s first appearance together since Kaine snagged the nomination.

Kaine had previously helped campaign with Clinton during the primaries, appearing at countless rallies. His enthusiastic endorsement undoubtedly helped land him on Clinton’s shortlist of VP picks, as did his representation of a key battleground state. Citing his political bonafides, the presidential hopeful was quick to praise her running mate.

“Sen. Kaine is everything Donald Trump and Mike Pence are not,” Clinton said. “He is qualified to step into this job and lead on day one.”

Kaine took the stage soon after. In a lengthy, impassioned speech, he talked about his formative years, including his time as Governor of Virginia and mayor of Richmond. Shifting between English and Spanish to address Miami’s Latino community, he announced a promise that he and Clinton would take action to help immigrants quickly after taking office.

“In the first 100 days, we’ll put forward a comprehensive immigration reform package that includes a path to citizenship.” —@TimKaine

Many following along on social media seemed impressed with Kaine’s first speech as a VP candidate, taking to Twitter to shut down the criticism that he was a boring—if not, safe—pick.

I strongly recommend that if you've only read about Tim Kaine, you take some time to watch the speech he just gave. It was major.

We’ll be seeing a lot more of Clinton and Kaine at the Democratic National Convention Monday.