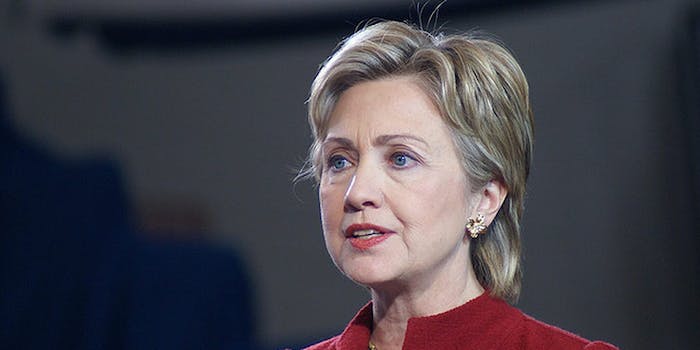 Clinton wants to overturn a Bush-era law that protects firearm dealers from liability.

“America simply cannot accept as ‘normal’ 30,000 gun deaths every year,” reads a briefing on Clinton’s 2016 campaign website. “The vast majority of the American people—including law-abiding gun owners—believe we can and must do better.”

The Clinton campaign is also calling for Congress to close a number of loopholes that allow gun sales to proceed online or at gun shows without a complete background check.

In addition, Clinton would seek to repeal the Protection of Lawful Commerce in Arms Act, a law that prevents firearm manufacturers and dealers from being held liable for negligence when crimes are committed with their products. The bill was signed into law by President George W. Bush in October 2005, and praised by the NRA as “the most significant piece of pro-gun legislation in twenty years.”

Clinton proposed a number of other measures with the purpose of keeping firearms out of the hands of violent felons, domestic abusers, and those who suffer from mental illness. As president, she would support legislation to prohibit all domestic abusers from buying or possessing guns, her website says. She also promises to make it a federal crime for someone to buy a gun with the intention of giving it to a violent felon, a practice known as “straw purchasing.”

When an individual with a clean record buys a gun with the intention of giving it to a violent felon—only so that felon can avoid a background check—it should be a crime. Currently, “straw purchasing” is a paperwork-related violation.

Clinton’s Republican opponents have accused her of “politicizing” the brutal killing of nine people at the Umqua Community College. President Barack Obama made no apologies for raising the gun-control issue at a press conference following the shooting on Thursday. “Somebody somewhere will comment and say, ‘Obama politicized this issue,’” he said. “Well, this is something we should politicize. It is relevant to our common life together, to the body politic.”