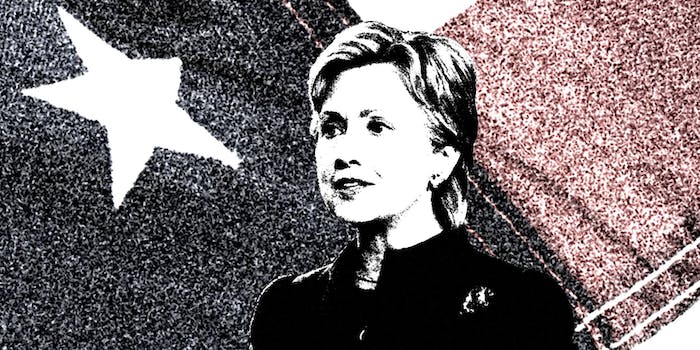 Hillary Clinton is officially running for president in 2016

The frontrunner joins the race.

A top Hillary Clinton advisor has announced in an email to supporters that the former Secretary of State is officially running for president of the United States in 2016.

In a subsequent tweet, Podesta announced that he will serve as chairman of Clinton’s campaign.

Jumping back into the Twitterverse as @HillaryClinton launches presidential bid. Proud to be Chairman of Hillary for America. #Hillary2016

Clinton’s campaign website, HillaryClinton.com, confirms the campaign with a new video. The video starts with a litany of “everyday Americans” talking about their plans for 2015. “I’m getting ready to do something, too,” Clinton says, making her first appearance a little more than halfway into the 2-minute video. “I’m running for president.”

Couching her campaign in populist language, Clinton asserts that “Americans have fought their way back from tough economic times, but the deck is still stacked in favor of those at the top. Everyday Americans need a champion, and I want to be that champion.”

The video was quickly followed up with a press release.

.@HillaryClinton has the same Washington-knows-best mentality people around the country are looking to move beyond. – SKW

Clinton enters the race as a particularly strong frontrunner. She is winning in almost every poll over Republican candidates by up to ten points. Against her fellow Democrats, her advantage is mountainous. Prediction markets currently have her as a 75 percent favorite to become the Democratic nominee for president next year and a 50 percent favorite to win the general election in November 2016.

A former first lady, secretary of state, and senator from New York for eight years, Clinton left that post to run for president in 2008, a race she lost to President Barack Obama.

Despite the virtual inevitability of Clinton’s 2016 run and her long-held frontrunner status, the last few months have seen slip-ups, most notably the email scandal that gained international headlines for transgressions against transparency and security during her tenure as secretary of state.

In between a handful of recent public speeches, Clinton has let her voice be heard through social media. Twitter, in particular, has played a key role in putting her front and center in the national conversation. For someone with the existing political power of Clinton, 140 characters are often all she needs.

Like IN law, AR bill goes beyond protecting religion, would permit unfair discrimination against #LGBT Americans. I urge Governor to veto.

Sad this new Indiana law can happen in America today. We shouldn't discriminate against ppl bc of who they love #LGBT http://t.co/mDhpS18oEH

GOP letter to Iranian clerics undermines American leadership. No one considering running for commander-in-chief should be signing on.

Praying for #WalterScott's family. Heartbreaking & too familiar. We can do better – rebuild trust, reform justice system, respect all lives.

In what may become an unprecedented fundraising effort, Clinton is expected to raise some $2.5 billion over the next 19 months. Obama defeated her in 2008 with a small-donor network and online outreach. This time, Clinton has hired a former Google executive as her campaign’s chief technology officer, in an attempt to recreate and surpass Obama’s grassroots fundraising strategy.

But the major donors haven’t gone away, either. Media reports say there are tens of millions of dollars in big donations waiting to be unveiled shortly after this announcement to serve as a starting point for Clinton’s campaign.

In fact, the tens of millions come in on the low end of expectations. Priorities USA Action, a political action committee supporting Clinton, aims to raise $500 million; however, reports show that, so far, they’ve come up short.

As the Democratic frontrunner and former first lady, Clinton long been a target for Republicans. In the hours before Clinton announced her candidacy, former Florida Gov. Jeb Bush—the current GOP favorite despite the fact that he has not yet officially declared his 2016 bid—released an ad attacking “the Obama-Clinton foreign policy” and “their failed big government policies.”

Sen. Rand Paul (R-Ky.), who recently announced the official start to his own campaign, has criticized Clinton’s career and campaign, adding there were a lot of issues that would “shake the confidence of Americans in her ability to lead in an honest fashion.”

When predicting how well Hillary might do in the general election, political scientists have been looking at indicators like Obama’s approval rating and the growth of the economy. If Obama hits 50 percent or above by November 2016, and if the economy keeps growing, Clinton’s chances would seem to be much higher, they say.

The Democratic National Convention takes place in Philadelphia on July 28, 2016. All current expectations place Clinton on the stage that day as the party’s presidential nominee, which would make her the first woman to achieve that position.

Photo via Marc Nozell/Flickr (CC BY 2.0) | Remix by Jason Reed