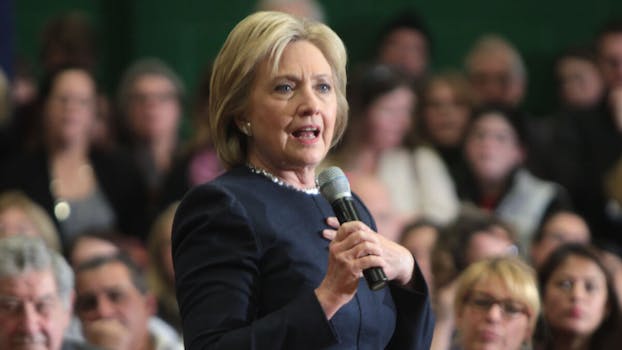 The U.S. surpassed Italy and China to become the country with the world's most known coronavirus cases.

The U.S. surpassed Italy and China on Thursday to become the country with the world’s most known coronavirus cases, with more than 100,000. Hillary Clinton responded to the news on Twitter with what many are calling “pettiness.”

“He did promise ‘America First,'” the former secretary of state wrote on Friday, referencing a slogan often used by Trump on his 2016 campaign trail and his administration’s stance on foreign policy.

Many felt the “pettiness” was uncalled for at a time when people are dying.

“I’m Irish, and definitely no fan of Trump, but this is petty and uncalled for, people are dying and you disrespect their memory with this inappropriate pettiness!! Guess the American public didn’t have much of a choice after all, as you are proving that you are as bad as Trump!!” Twitter user @madmarkno10 wrote in response.

Clinton has been vocally critical of Trump’s response to the pandemic. On Tuesday, she urged the public to “not take medical advice from a man who looked directly at a solar eclipse” after Trump touted an anti-malarial drug as a coronavirus treatment. In 2017, Trump took off his protective glasses to look at an eclipse.

“A month ago, Trump said: ‘It’s going to disappear. One day, it’s like a miracle, it will disappear.’ Yesterday, he said: ‘I don’t believe you need 40,000 or 30,000 ventilators.’ What will it take to get @realdonaldtrump to listen to experts instead of his own hunches?” she more recently tweeted on Thursday.

The Trump quotes Clinton used in her tweet are accurate. In February, when speaking to Black leaders at the White House, Trump said, “And you know what? If we were doing a bad job, we should also be criticized. But we have done an incredible job. We’re going to continue. It’s going to disappear. One day—it’s like a miracle—it will disappear.”

New York, currently the epicenter of the coronavirus in the U.S., claims it will need tens of thousands of ventilators to make it through the pandemic, numbers that Trump questioned in a recent appearance on Fox News.

But this is also not the first time Clinton has been criticized over her own response to the pandemic. Clinton and her husband, former President Bill Clinton, recently sent $400 worth of pizzas to hospitals in Westchester County, their home county in New York, to feed healthcare workers.

Some argued that pizza is not what healthcare workers want nor urgently need right now.

“I’ve been a union rep for multiple healthcare and hospital unions and the running joke is that instead of fair wages, safe equipment, or proper staffing — mgmt is always bringing in free pizza,” user @Grbssss wrote in a now-viral tweet.