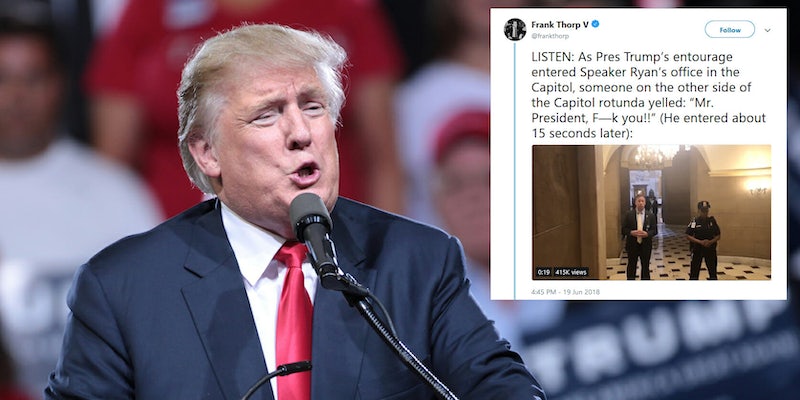 The shout comes as tensions are running high because of Trump's immigration polices.

A woman yelled at President Donald Trump on Tuesday right before he entered the Capitol rotunda to speak with House Speaker Paul Ryan (R-Wis.).

A video of the incident, posted on Twitter by NBC News reporter Frank Thorp V, shows people walking through the hallways of the Capitol before the woman shouts: “Mr. President, fuck you!”

According to NBC News, she’s a congressional intern.

LISTEN: As Pres Trump’s entourage entered Speaker Ryan’s office in the Capitol, someone on the other side of the Capitol rotunda yelled: “Mr. President, F—k you!!” (He entered about 15 seconds later): pic.twitter.com/KHp16LYMoF

Here is another look at the shouting:

Congressional aide or intern yells “Mr President, f*%k you!” from across the Capitol Rotunda as he walks to the Speaker’s office before mtg with House GOPers on immigration. Gets attention of USCP/Secret Service pic.twitter.com/5Uarw4FTsw

Fox News reports that the president had not yet passed through the rotunda as the woman shouted the expletive.

The shouting inside the Capitol rotunda comes as tensions are running high amid the Trump administration’s decision to separate undocumented children from their families at detention centers along the border.

Another Trump administration official, Department of Homeland Security Secretary Kirstjen Nielson, also faced the wrath of hecklers on Tuesday when a group of people shouted “shame” at her while she was eating at a Mexican restaurant in Washington D.C.