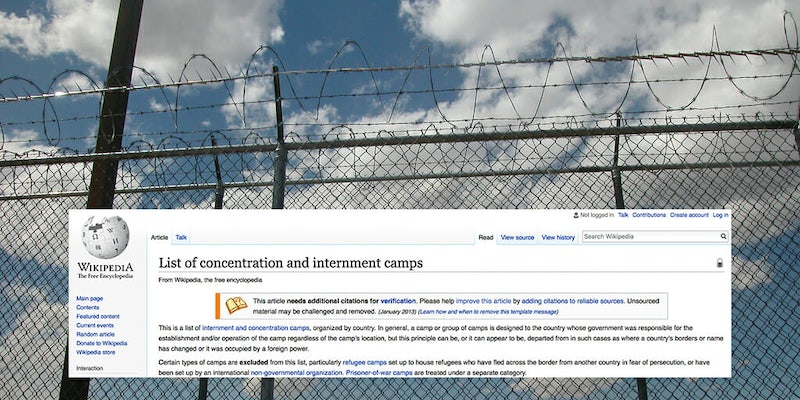 The centers have been compared to child prisons.

The detention centers holding immigrant children separated from their parents at the U.S.-Mexico border have just earned a place on Wikipedia’s list of concentration and internment camps, Vice reported Tuesday.

From the Japanese internment camps of World War II to the Gulags of the Soviet Union, the Wikipedia list includes some of history’s most horrific detentions.

Controversy has exploded over the immigrant detention centers following a flood of disturbing images and audio showing children locked in metal cage cells and crying for their parents.

The Wikipedia section, titled “Separation of immigrant children,” describes how the centers have been likened to “prisons” and “internment camps.” The entry also notes that nearly half of the centers in Texas have “previously been cited for more than 150 health violations” by officials.

An initial comment on the Wikipedia’s talk page urged for the article to be locked from further edits, but the request was denied. Subsequent comments debated whether the detention centers fell under the definition of “internment,” which the website defines as “the imprisonment or confinement of people, commonly in large groups, without trial.”

Some users argued that the children are not technically being imprisoned or confined without trial and that including them on the same list as Nazi concentration camps was inappropriate.

User The Anome disagreed, saying no comparison was being made. “[T]his is a list of concentration and internment camps, and these are very clearly internment camps. For children. In America. In 2018. For shame,” the user wrote.

The comment war waging on Wikipedia largely reflects the sentiments of many across social media who feel the immigrant detention centers are unjust, calling them “un-American” and “inhumane.”

I don’t care whether you’re a republican, democrat, independent or nothing at all…. I think we can ALL agree that these ICE detention centers & children literally being held in cages is RIDICULOUS, INHUMANE & SHOULD BE UNCONSTITUTIONAL

We the American people must defend the Constitution from all enemies, foreign and domestic. That includes the government if it commits crimes against humanity. #KeepFamilesTogether

Trump administration officials and conservative commentators have tried to shake off the negative coverage, saying the conditions of the centers are being misreported.