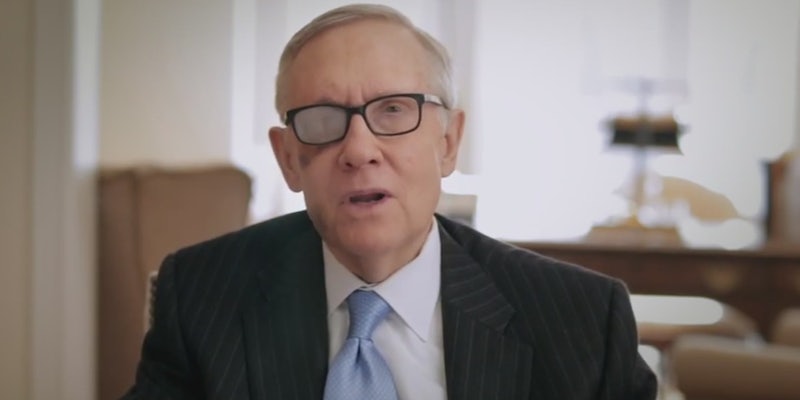 Reid's face may be bruised, but he says that's not why he's retiring.

Senate Minority Leader Harry Reid (D-Nev.) as announced that he will retire at the end of his fifth and current term.

In a polished YouTube video, Reid, still nursing a home exercise injury that still mars the right side of his face, said that, thanks to “a little downtime” spent recuperating, “I have had time to ponder and to think.”

“We’ve got to be more concerned about the country, the Senate, the state of Nevada than us,” Reid said. “As a result of that, I’m not going to run for reelection.”

Reid, certainly aware that the first thing viewers will notice is his injured face, opened his video addressing by addressing his injuries.

“These bruises I have on my face, on my eye, are an inconvenience, but trust me: They’re nothing compared to some of the bruises I got when I was fighting in the ring.”

That’s a nod to Reid’s time as an amateur boxer, a past life that he has mentioned frequently during his decades in politics.

In explaining his decision to retire, Reid said he wanted Democrats to focus on regaining the Senate, calling it “inappropriate” for the party to spend vast sums helping to reelect him in November 2016. He also said that his decision was not directly related to his injury.

Reid has enjoyed a long political career, having spent one term each as governor of Nevada and representative of that state before his election to the Senate in 1986. He became Senate majority leader in 2007, shortly before the 2008 election that brought Barack Obama to the White House. His term as leader of the Senate ended in January, following massive Democratic losses in the 2014 midterms that gave Republicans control of the upper chamber.

The famously hard-nosed Reid wasn’t the most liberal of Democratic congressional leaders, having opposed abortion rights and argued for aggressive U.S. military action in the Middle East. But he is known and respected among his colleagues for keeping a tighter leash on his members than his Republican counterpart, Majority Leader Mitch McConnell (R-Ky.)

Reid’s announcement video ends with a montage filled with photos of Reid and his family.

“I get a little upset sometimes when I hear politicians say they’re gonna go spend time with their family after they decide that they’re not going to be in politics anymore,” his wife, Landra, says.