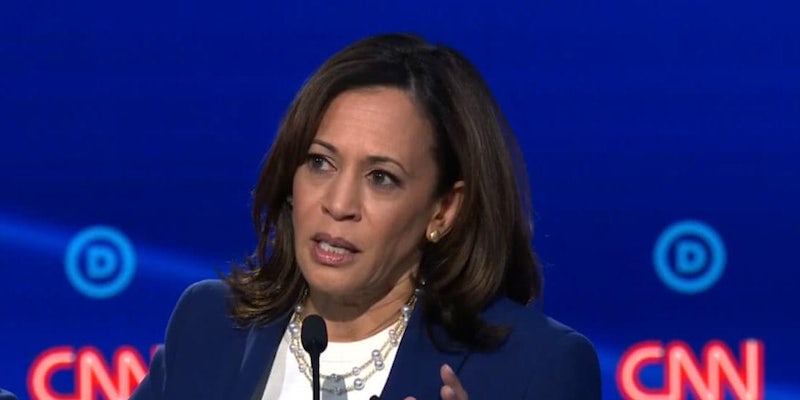 Sen. Kamala Harris (D-Calif) used some of her time on the debate stage tonight to repeat her calls for Twitter to suspend President Donald Trump’s account. Surprisingly, she also went after Sen. Elizabeth Warren (D-Mass.) for not having her back on the issue.

During a debate over whether tech companies should be broken up, as Warren has urged, Harris led by saying that it is a “grave injustice” that tech companies don’t equally apply the rules to powerful and powerless people. Then her argument went to Trump.

“Senator Warren, I just want to say I was just surprised to hear that you did not agree with me on this subject of what should be the rules of corporate responsibility for these big tech companies when I called on Twitter to suspend Donald Trump’s account,” Harris said.

“Here we have Donald Trump, who has 65 million Twitter followers and is using that platform as the President of the United States to openly intimidate witnesses, to threaten witnesses, to obstruct justice, and he and his account should be taken down.”

“It is a matter of safety and corporate accountability,” she said.

“I don’t just wanna push Donald Trump off Twitter, I want to push him out of the White House,” she said.

Some understood where Harris was coming from, but most observers were confused by Harris’s bizarre, if impassioned, attack on Warren.

“Kamala Harris is attacking Elizabeth Warren about not shutting down Trump‘s Twitter account and Elizabeth Warren is like: But why are you taking money from big tech and big pharma, though?” tweeted The Root writer Michael Harriot.

“Kamala Harris going after Elizabeth Warren on banning Trump from Twitter is one of the more pathetic stunts I’ve seen in a debate,” quipped Crooked Media founder Jon Lovett.

I thought Kamala was having a really good night until that bizarre attack on Warren over whether Twitter should suspend Trump. It felt so calculated and worse, underscored how dumb it is for a presidential candidate to call for banning Trump from Twitter.

Kamala Harris isn’t wrong about the impact of hate speech on Twitter and the need to shut down Twitter accounts that do this, including Trump’s. #DemocraticDebate

Kamala Harris told Elizabeth Warren if you’re serious about breaking up big tech and corporate responsibility then why don’t you join me in asking Twitter to suspend Donald Trump’s account?

Getting Twitter to deplatform Trump, of all things, is a weird thing for Kamala to distinguish herself from Warren.

That topic is incredibly low on the list of priorities for virtually everybody.#DemDebate

Felt like a “grasping for straws” strategy by Kamala Harris to go after Elizabeth Warren about her not fully being on board with Trump twitter account suspension. #DemDebate

Earlier today, the New York Times reported that the company said it would continue to be “lenient” with world leaders who violate its policies.