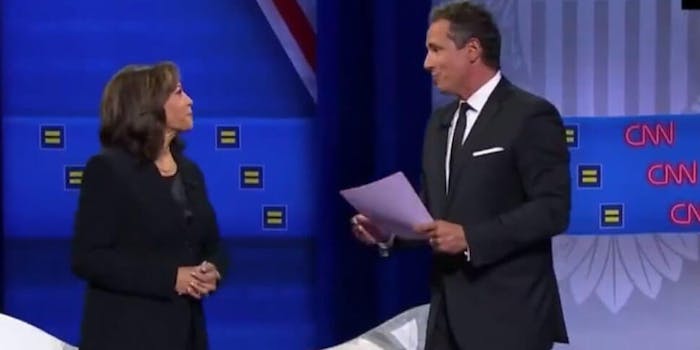 The biggest cringe came from a moderator.

When Sen. Kamala Harris (D-Calif.) took the stage at the CNN Equality Townhall last night, she gave her pronouns. Then CNN host Chris Cuomo said, in a joking tone, “mine too.” There was an uncomfortable beat of silent before Harris awkwardly responded, “all right.”

KAMALA HARRIS: My pronouns are she, her and hers.

CHRIS CUOMO: Mine, too.

In a matter of seconds, the exchange demonstrated everything wrong with how well-intentioned cisgender, heterosexual politicians and members of the political media approach the LGBTQ community. People on Twitter ripped into Cuomo for appearing to mock giving pronouns or just being incredibly clueless.

Chris Cuomo just mocked Sen. Kamala Harris saying her pronouns by responding "mine too" and the gasp I let out.

Chris Cuomo just made a joke about preferred pronouns? While hosting a town hall on LGBTQ issues?

Chris Cuomo made a pronouns “joke” on this CNN #EqualityTownHall and I just cannot … pic.twitter.com/ltN9zBK1WH

Not long after the segment with Harris was finished, Cuomo urgently tweeted an apology. “PLEASE READ: When Sen. Harris said her pronouns were she her and her’s, I said mine too. I should not have. I apologize,” Cuomo wrote. “I am an ally of the LGBTQ community, and I am sorry because I am committed to helping us achieve equality. Thank you for watching our townhall.”

On the one hand, the gaffe was so tone-deaf, it’s easy to believe that it came of ignorance, not malice. On the other hand, Cuomo’s apology doesn’t demonstrate that he understands why what he said was wrong. Even if Cuomo’s hurtful joke didn’t come from a place of transphobia, he is only an effective ally if he educates himself. In other words, he can support LGBTQ people, but unless he does the work to learn and repair harm, he isn’t an ally.

Harris showed allyship when she gave her pronouns. But when Cuomo made a joke in response, she let it slide. Maybe she didn’t want to be combative, or maybe she didn’t know why it wasn’t OK, either. Anyone can say they’re an ally, but actually being an ally isn’t as easy.

What this awkward exchange really demonstrated was the inherent problems with letting the privileged lead discussions on marginalized issues. If it’s not their community, there’s a lot they won’t inherently understand. That doesn’t mean cisgender, heterosexual people can’t be a part of these discussions. It means that it’s basic politeness for them to do their homework first. It also means the experts should be given priority on the mic. Although there were multiple gay moderators, none of the moderators were transgender. CNN reportedly scrapped the only planned question from a Black trans woman at the last minute, in spite of the epidemic of violence against them.

If 2020 Democrats and members of the media want to push for equality, they should be making space—not jokes.