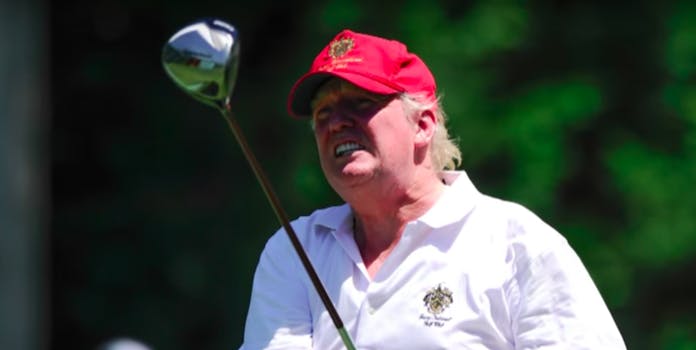 On Saturday, President Donald Trump used his Twitter account to promote his business in Scotland, and even tried to link it to diplomacy.

The president retweeted the Trump organization, which quoted Dr. Martin Hawtree: “The landscape framework of @TrumpScotland comes close to an ideal. There is nothing missing & there are no weak holes.”

Who exactly is Dr. Martin Hawtree? The architect of  Trump International Golf Links in Scotland, as the Washington Post pointed out.

Trump’s refusal to divest in his business interests has been a major concern since the 2016 campaign. In January, the Inspector General for the General Services Administration recommended a legal review of the president’s lease on the Old Post Office Building in Washington, D.C., which is now a Trump hotel.

Critics on Twitter called out the president’s tweet, including former Director of the Office of Government Ethics Walter Shaub.

“This is Trump’s most explicit commingling of personal interests and public office to date,” he tweeted.

“This is the tone from the top that leads his appointees to violate ethics rules. This is shameless, corrupt and repugnant presidential profiteering. This is an invitation to graft.”

“There it is. The president is using an official statement as an ad for his business and making sure everyone knows he ties his business to US relationships with foreign countries,” Citizens for Responsibility and Ethics in Washington (CREW) tweeted.

There it is. The president is using an official statement as an ad for his business and making sure everyone knows he ties his business to US relationships with foreign countries. https://t.co/aKWQwx856g

It's #SaturdayMorning. That means @realDonaldTrump is using his public office for private gain, again.

Also, does it sound like @POTUS thinks there is somehow a "national emergency" when he is making official statements about his private golf course? https://t.co/s1GzjOAYKN

Even though Trump’s tweet says that the project “furthers U.K. relationship” with the U.S., the project actually attracted a fair amount of criticism in Scotland; it’s been a target for environmental organizations in the U.K., who objected to a proposed expansion of the course. The Aberdeenshire course was also the subject of a protracted legal battle with the Scottish government.

Trump’s tweet comes just days after the Aberdeenshire golf club was ordered to pay the Scottish government’s legal fees in the battle over the government’s decision to build a wind farm near the course. Trump tried to block the project because he didn’t want the view to be altered.