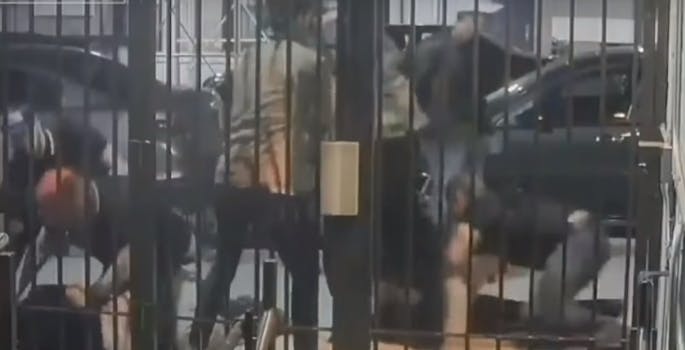 Sentences could range from jail time to community service.

Two of the 10 members of the far-right group the Proud Boys, who were caught on camera last year for violently fighting outside an event at the Metropolitan Republican Club in New York City, pleaded guilty this weekend.

Jake Freijo and Eryk Kaczynski pleaded guilty to disorderly conduct and will have five days of community service, the Manhattan District Attorney’s Office says. This is part of a plea deal. Six others charged will appear in court April 5.

But the prosecutors have already recommended sentencing for the fight. John Kinsman and Maxwell Hare could face up to one year in jail for second-degree assault and second-degree rioting charges. Geoffrey Young and David Kuriakose could see 30 days behind bars on a plea to riot in the second degree and third-degree attempted assault.

The brawl broke out on Oct. 13 after Proud Boys founder and Vice co-founder, Gavin McInnes, gave a speech at the club. A group of left-wing protesters with Antifa performed anti-fascist chants outside.

In the initial video released by the NYPD, it looks like the protesters may have started the fight by throwing a bottle at the Proud Boys.

Thank you those who’ve submitted info regarding the violent incident which took place on 10-12-18 in the UES. As we further the investigation, we urge additional victims/complainants/witnesses to come forward. If you have info, call CrimeStoppers, 800-577-TIPS pic.twitter.com/amUhGvCJLg

But footage taken from a nearby building security camera show group members Hare and Young running toward the group before the bottle was thrown.

4/6 The brand new footage shows what followed: two Proud Boys went east on 82nd Street, approaching protesters who were perhaps 100 feet away from Park Avenue. By the time the plastic bottle was thrown, one of those two Proud Boys was within a few feet and charging. pic.twitter.com/oHq2MamC4m

McInnes has since tried to distance himself from the group he created, officially stepping down in 2018. The fraternal organization has been called a hate group by the Southern Poverty Law Center.