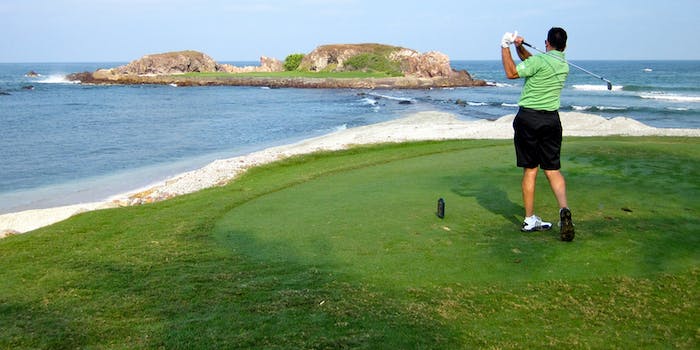 The introduction of “Glasshole” into the popular lexicon is proof enough that Google’s flagship wearable technology product has an image problem. And the latest news about Google Glass probably won’t improve that reputation.

Google Glass—which has been rolled out over the past year at a snail’s pass—set up it’s first physical shop Friday at a PGA golf tournament in Florida. The sales booth apparently did gangbusters business, but may only further Glass’s elitist perception.

The sales display was first reported by Business Insider, which had been tipped off by a tweet from a reader.

Google sales reps working the booth confirmed that this was the first public sales display for Glass. The shop was part of the festivities surrounding the Players Championship at Ponte Vedra Beach, Florida. According to these same reps, sales were even better than expected. To help sales, Google was also offering a gadget specifically targeted at golfers: a club mounted camera.

This is only the second time Google Glass has gone on sale to the general public, following a one-day only online sale on April 15. It’s the first time a physical retail shop has been set-up to sell the wearable computer. But the venue choice seems a bit tone-deaf for a product and company that have had to fight back against charges of elitism lately.

Although Glass was first announced in 2013, for more than a year it was only available to hand-selected “explorers” who paid $1,500 for the privilege of testing the product. Even the limited public sales still came with a $1,500 price tag. This means that despite a lot of public hype surrounding the product, few have been able to get their hands on it and use it.

According to critics, this has cultivated a negative perception among the public, who view the wearable technology as snobbish or creepy, or both. Many are concerned about the prospect of being unknowingly filmed by Glass cameras, while explorers themselves have sometimes behaved in such rude ways that Google felt compelled to release an etiquette guide to help preserve the brand.

Last month, Google Glass’s head of marketing, Ed Sanders defended the high price point and the prolonged rollout as being necessary to attract serious techies who could help test and improve the product prior to a wide release. However, he acknowledged the existence of an image problem.

How selling Glass at a professional golf event—a sport often associated with the wealthy country club set—will help improve the product’s reputation has yet to be seen. But a Google spokesperson tells Business Insider that, “we’re always testing new ways to expand the Explorer Program.”

Glass is not the only front on which Google has been fighting accusations of classism. In San Francisco, Google employee commuter busses have been the flashpoint for protests and now a lawsuit from those who feel Google and other Silicon Valley tech firms are forcing out lower income residents.