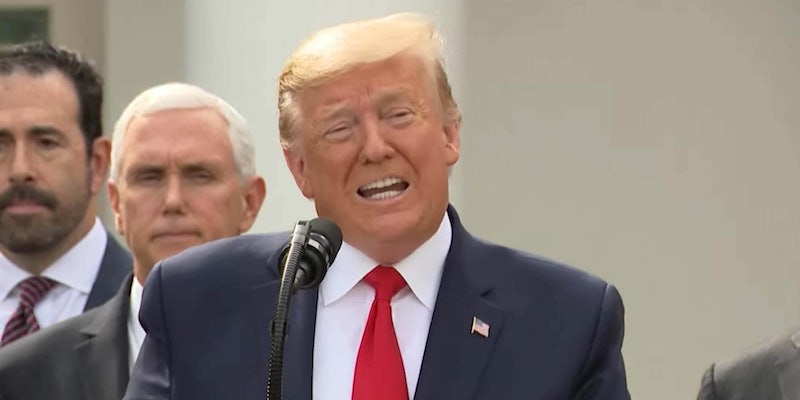 Google poured cold water on his claim shortly after.

Google has pushed back on claims made by President Donald Trump Friday that the tech company is developing a nationwide website for coronavirus screening.

While declaring a national emergency over the pandemic outside the White House, the president falsely stated that Google would soon offer the nation a way “to determine if a test is warranted” to see whether individuals have been infected with the virus.

“Google is helping to develop a website—it’s going to be very quickly done, unlike websites of the past—to determine if a test is warranted and to facilitate testing at a nearby convenient location,” Trump alleged.

Despite touting that the tech giant had “made tremendous progress” by devoting 1,700 engineers to the project, Google poured cold water on the claim shortly after.

Google released a statement on Twitter from Verily, a separate group owned by Google parent company Alphabet, outlining the inaccuracy of the president’s remarks.

While a site is in the works, the tool was only intended for trial use in Northern California and is far from complete.

“We are developing a tool to help triage individuals for Covid-19 testing,” the statement says. “Verily is in the early stages of development, and planning to roll testing out in the Bay Area, with the hope of expanding more broadly over time.”

Carolyn Wang, communications lead for Verily, further explained to the Verge that the site was’t even initially designed for the public but instead for health care workers.

But with Trump’s inaccurate statement, Verily says it has now decided to tailor the site for public access as well, although it will only be useful for Bay Area residents until it is expanded at some point in the future.