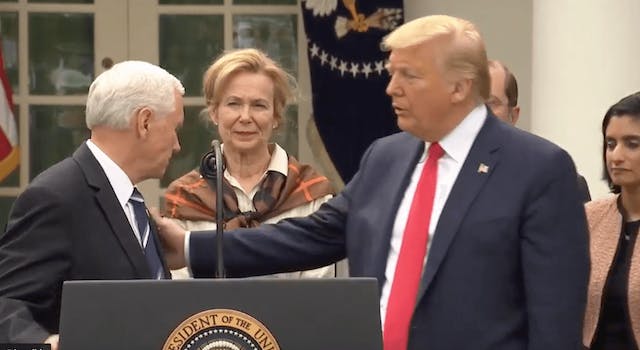 No one practiced social distancing.

As of Friday afternoon, members of the Trump administration say they don’t have coronavirus, but given their relative proximity to CPAC attendees and Brazilian officials who tested positive, people are concerned.

People were even more concerned to see that at a press conference Friday, U.S. officials opted not to implement recommended best practices to prevent the spread of coronavirus.

President Donald Trump, Vice President Mike Pence, tech and retail leaders shook hands, patted each other, and touched the podium one after another.

The Centers for Disease Control and Prevention, the World Health Organization, and other health organizations, however, recommend people stand away from each other (social distancing), avoid handshakes, and clean surfaces the virus can live on.

And people were losing it over the constant touching.

People at the podium may have eventually realized what they were doing. When Trump went for a last handshake, he instead got an elbow bump.

During the press conference, Trump announced a national state of emergency. He also called for a halt on interest to student loan payments held by the federal government and said that Google was helping to build a website where people could log their symptoms to see if they needed to get tested.

Perhaps Trump and company should check it out.

When asked if he would take any precautionary measures, Trump said he would not and that he displayed no symptoms.