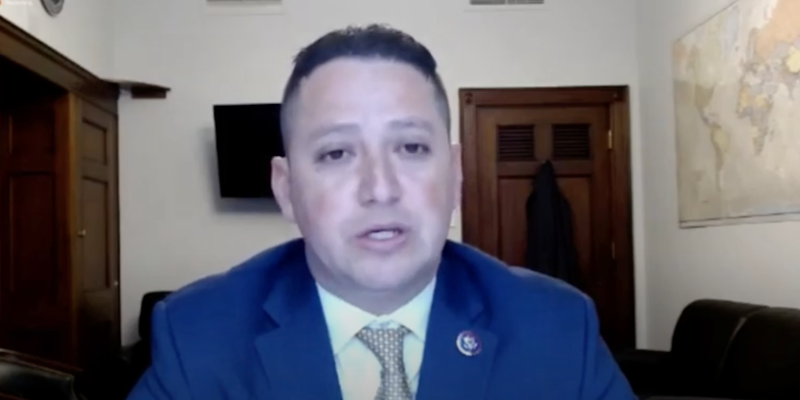 Anti-gun control tweets from Texas Rep. Tony Gonzales resurface in the wake of elementary school shooting in his district

Rep. Tony Gonzales (R-Texas) is under fire for 2021 anti-gun control tweets after responding to the deadly Ross Elementary School shooting that killed 19 children and two teachers late Tuesday morning in Uvalde, Texas— a city in Texas Congressional District 23, which he represents.

Following the shooting, Gonzales, who the National Rifle Association Political Victory Fund endorses, tweeted, “My heart breaks for the city of Uvalde. Pray for our families.” Twitter users referenced Gonzales’ tweets from last year that bashed gun control measures in the state, with many asking, “This you?” with screenshots of his tweets in the comments.

A tweet from March 2021 reads, “I voted NO on two gun control measures in the House today. I am a proud supporter of the Second Amendment and will do everything I can to oppose gun grabs from the far Left.”

“Hope you’re feeling just as proud right now, knowing you could have done something to protect the children in your district from this senseless tragedy,” one user commented under the 2021 tweet.

“Go to Uvalde and say that out loud,” another wrote.

“I’m sure your youngest constituents at Robb ES are particularly proud of those votes today, Congressman,” a third said.

According to data from World Population Review, Texas has the second-highest number of school shootings in the United States, just behind California. Since 1970, Texas has reported 135 school shooting incidents. The Ross Elementary School shooting is sparking heightened demand for gun control in the state.

“Praying for the families hasn’t done a damn thing for the past mass school shootings. GUN LEGISLATION ….that’s what we need now!! Do your job & listen to your constituents! They want gun legislation … NOW!” one user tweeted.

“Students deserve better than to live in constant fear of a shooting. We need Gun control. Now,” another wrote.

Twitter users are also putting Texas Gov. Greg Abbott on blast for a 2015 tweet encouraging Texans to buy more guns. The original tweet posted in October 2015 reads, “I’m EMBARRASSED: Texas #2 in nation for new gun purchases, behind CALIFORNIA. Let’s pick up the pace Texans @NRA.” This tweet was in response to a blog post from the Houston Chronicle that said “the Lone Star State still trails California” in new gun purchases.

In 2021, Abbott expanded gun rights in Texas by signing several new gun laws that allow people to carry a handgun without getting a background check and training and to carry a concealed weapon in public without a permit. The same year Texas had the highest number of gun licenses in the United States at 1,006,555, according to CBS News.

Many Twitter users believe that Tuesday’s shooting is a direct consequence of these new policies, holding Abbott accountable. Others pointed to the NRA’s endorsement of both Gonzales and Abbott, noting that Abbott is scheduled to speak at the NRA conference in Texas alongside Donald Trump and Ted Cruz just three days after the Ross Elementary school shooting.

“Horrific mass shootings will continue to take place in America as long as Republicans beholden to the NRA remain in power,” Jon Cooper tweeted.

“The NRA convention is in Houston this weekend and Gov. Abbott is speaking there on Friday in case you’re looking for the people responsible for this,” another user wrote.

“There is an NRA convention this weekend in Houston and Gov. Abbott is on the docket to be a keynote speaker. Doesn’t that say it all? He is part of the problem, not the solution,” a third said.