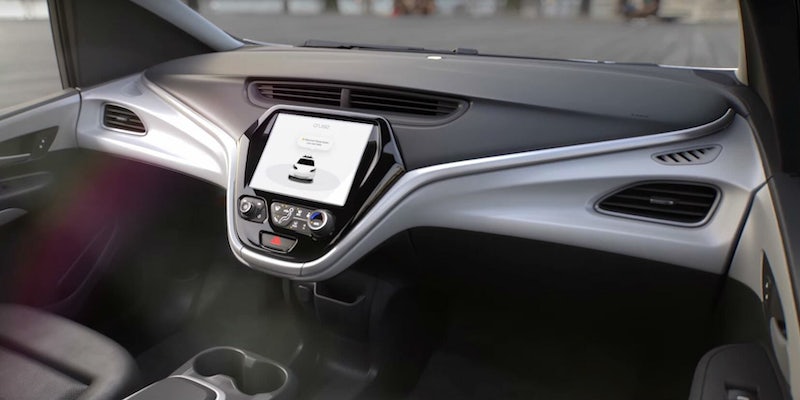 The radical concept will find its way into fourth-generation Chevy Bolt EVs.

The steering wheel may become obsolete sooner than we expected.

GM is asking the National Highway Traffic Safety Administration for permission to test autonomous vehicles without steering wheels by 2019. The automaker has been testing its self-driving Chevy Bolt on the streets of San Francisco and Phoenix.

Its plans for the fourth-generation model, aka the Cruise AV (yes Cruise, not Cruze), are radical: No steering wheel, no pedals, no manual controls, and no driver. They also won’t have an owner since GM will deploy its self-driving car for ride-hailing, not personal use.

In its proposal, GM asks the administration for alternative ways to meet the 16 federal driver-based requirements for operating on public roads. If granted, the automaker would have an easier time deploying its vehicles in cities throughout the U.S., though it would still need approval on a state level. Currently only seven states—Michigan, North Carolina, Tennessee, Georgia, Texas, Colorado, and Nevada—allow for testing vehicles without steering wheels or pedals.

GM said in a safety report that it’s working with industry groups to “advance the safety of self-driving vehicle technology.”

The announcement comes on the final day of the International Consumer Electronics Show in Las Vegas, where dozens of tech and auto companies showed off plans to enable a self-driving future. Unlike some vehicles coming out of the electronics show, GM’s vision looks rather ordinary, a natural transition from today’s vehicles. As you can see in this concept video, the interior of the self-driving Bolt, or Cruise EV, looks nothing like the futuristic Byton or other over-the-top concepts we’ve seen over the years.

Without the need for a steering wheel or pedal, we wonder whether GM could take things a step further. Why do the seats need to face forward? Why is there still a center console between the driver and passenger? Why is the infotainment screen still in the center?

That said, this is a step in the right direction, and after all the failed concepts we’ve seen, a more practical approach may just what the industry needs. We expect to hear a lot more about the Cruise EV during the Detroit Auto Show next week.