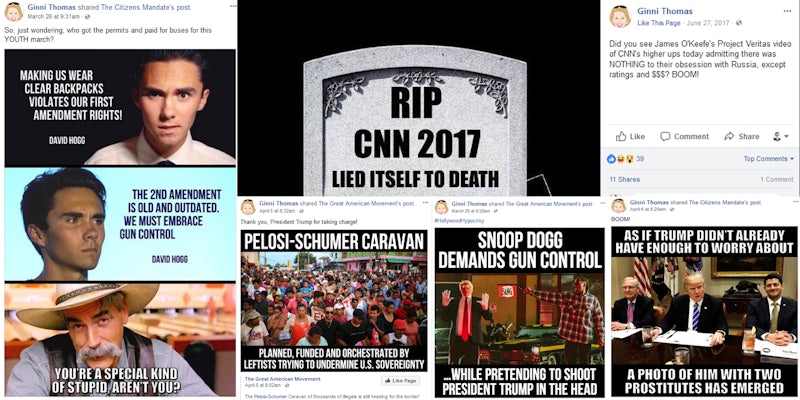 The targets include Parkland survivors, CNN, and immigration.

Ginni Thomas, the wife of Supreme Court Justice Clarence Thomas, seems to have the same kind of Facebook wall as your super conservative relative.

A casual look through Thomas’s Facebook page is essentially a meme-filled glance into far-right communities on social media.

Thomas has joined in the conservative bashing of the Parkland shooting survivors, praised the videos of media-bashing Project Veritas, and posted a meme meant to stoke fear about the so-called “caravan” heading toward the U.S.’s southern border (that even Breitbart tried to pour cold water on).

It seems the talk of gun reform in the wake of the Parkland shooting, where 17 people were killed at Marjory Stoneman Douglas High School in February, has struck a particular nerve with Thomas.

Besides joining other hyperconservative personalities who have targeted (and even created wild conspiracy theories about) David Hogg, Thomas also shared a photo that compares gun control to the Holocaust.

“To all the kids that walked out of school to protest guns. These are the shoes of Jews that gave up their firearms to Hitler,” said the caption under the photo Thomas shared. “They were led into gas chambers, murdered and buried in mass graves. Pick up a history book and you’ll realize what happens when u give up freedoms and why we have them.”

In addition to the more visceral content, Thomas also has more mainstream conservative posts on her Facebook, including ones that bash Republicans in Congress in favor of President Donald Trump, slam “the left” for vague “tactics” they are allegedly using, and point out what she sees as hypocrisy in celebrities demanding gun control.

In case you missed it the first time: Thomas’s husband is a justice sitting on the Supreme Court.