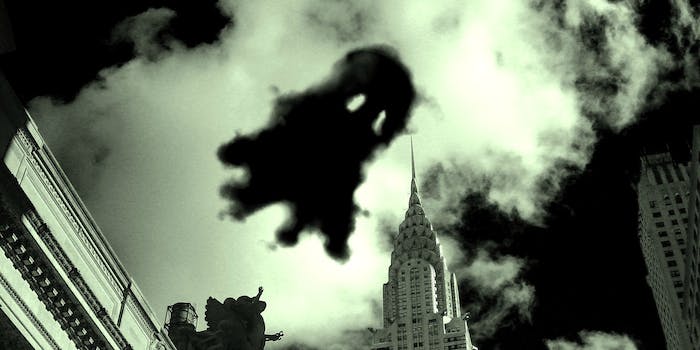 Professional mediums once had a stranglehold on the apparition market. The App Store changed everything.

Let’s say that you’re looking to track, communicate with, and potentially even bust some ghosts. How are you, a layperson with no background in phantasmology, supposed to do such a thing?

It used to be that professional mediums had a stranglehold on the apparition market, forcing you to either pay their jacked-up prices or make do with a notoriously temperamental and vague instrument, like a Ouija board. Fortunately, our digital society has put the necessary tools in the clammy hands of the individual: There are now more than a dozen spirit-seeking applications available in the App Store.

To help inform potential ghost-hunters, I downloaded as many of these apps as I could find and set about testing them. I began at my apartment, as a sort of control, and then traveled to St. Mark’s Church-in-the-Bowery and the so-called House of Death—two of the most haunted buildings in New York. I’ve divided the apps into those most suitable for a beginner, intermediate, and expert ghost hunter, and given a brief overview of my experience for you to peruse… if you dare.

Please, by all means, dare. If you’re looking for a ghost-tracking app at its most bare-bones—so to speak—you can’t do better than Ghost Radar: Classic. It’s just basic, no-frills ghost detection.

By measuring the quantum fluctuations around your device, GRC purports to determine the presence of a spirit—a green dot—and even communicate with the being.

In the above image, a ghost in my apartment is saying “push.” A ghost at the House of Death told me “equal,” while a ghost at St. Marks favored me with “planet.”

A variation on the same theme, Ghost Communicator also makes use of a radar-like design. The major difference is an added component of touch, requiring you to place your index finger over the fingerprint.

There’s no dot to indicate a disturbance in your area, but specters were detected, telling me “follow” at home, “bottle” at the House of Death, and “electric” at St. Mark’s. Ghost Communicator loses points for its prominent “For entertainment purposes only” disclaimer. Though Ghost Detector Free appears essentially identical to Ghost Radar: Classic, it has a few key differences. First, by utilizing “advanced algorithms to configure your device’s sensor’s sensitivity,” it allows you to measure EVP and EMF, as opposed to Quantum Fluctuations. In addition, it boasts that it has been “used by professional paranormal investigators in Tampa, Fla.”

Perhaps as a result of these facts, the spirits I detected with this app were markedly more chatty, and weirdly specific. In the space of one minute at the House of Death, a ghost told me these words: “nervousness,” “seminary,” “palace,” and “inopportune.”

Of all the apps I tested, Ghost Locator is far from the most impressive, but it may be my favorite. Simply press the “on/off” switch, and within seconds, a ghost will appear on the radar screen along with some pertinent details. You can click on the phantom for more information—Heath, for example, is 237 years old, died in 1801 at the age of 24 from drowning, and currently weighs 0 pounds (all the ghosts weigh 0 pounds, as the app dutily informed me each time).

Most intriguing, however, is a side feature of the app—the Ghost Herald, which, along with the Werewolf Herald, is a publication run by the app company. An excerpt from the July 14 edition: “It was the first full moon since the transformation from human to beast … my transformation, that is … a burst of stamina ran through my veins like a hare who had just drank [sic] a gallon of strong, black coffee.”

Also, if you enter the cheat code “666,” you can track the devil (he’s always right next to you). Now that you have a basic grounding, it’s time to take your spectral activities to the next level. Ghost Observer not only tracks spirits, but displays them on your screen.

Through this app, I learned just how ubiquitous ghosts are—I found several at St. Mark’s (above) and the House of Death, but also at my apartment, at my office, on the subway, and at a Taco Bell in Queens.

The app is free, but with a $1.99 upgrade you can access the “translate” feature and hear what I assume is a sea of spirits screaming to be heard over each other.

If you’re desperate to hear ghoulies in your area but don’t want to pay a premium, check out Ghost Recorder, which “uses special technology to pick up the supernatural ghost noises that are beyond the realm of the human ear.”

Unfortunately, the app doesn’t allow you to download your recordings, but it confirmed Ghost Observer’s findings: I heard a feedback noise, wheezing laughter and, for some reason, a creaking door, at St. Marks, the House of Death, my apartment, my office, on the subway, and at a Taco Bell in Queens. Spooky stuff. The Ghost O Meter is pretty self-explanatory—it measures the presence of ghosts in your area, with higher levels of PKE making the needle jump to the right. The app costs a dollar, but it was actually one of the most intriguing I tested.

After getting no reading at my apartment, I experienced high PKE levels at the Death House, with the needle jumping more and more the closer I was to the property. I was less impressed at St. Mark’s, where the Ghost O Meter eschewed the inside of the church in favor of a bannister outside. On the other hand, who am I to say this bannister wasn’t particularly haunted? Specializing in tracking EMF, Ghost Sonar Free is the only app I tested that never gave me any readings. Perversely, this makes me believe in its viability all the more—it would be pretty ballsy to release a ghost tracking program that doesn’t ever do anything.

In any case, Ghost Sonar is most suitable for the paranormal investigator with time on his hands and a lot of patience. The Cadillac of Ghost Hunting equipment, Ghost Hunter M2 costs a dollar but comes with everything you could want: audio and video analyzers, a geoscope, a special camera, and a whole slew of sensors.

On the negative side, there’s so much to sift through that it can be overwhelming, and the user interface is rather dull—each section only offers an on/off button, without any switches to flip or dials to tune.

Despite these flaws, though, Ghost Hunter M2 is the most thorough and in-depth app on the market—truly putting the “science” in pseudoscience.

Ghost Detect Pro is also not for neophytes: It’s chock-full of ghost-seeking technology and providing more data than you could ever hope to interpret. Just look at all that data!

Its interface is simpler and more user-friendly than Ghost Hunter M2, and it wins distinction for providing me with my most genuinely chilling moment: At the House of Death, I opened the app and spoke aloud, telling any wraiths to make themselves known (a particularly effective method, as we learned in Paranormal Activity). As soon as I finished my request, a voice emanated from my iPhone’s speaker, telling me, “Splendid.”

As you can see, it’s easier than ever to track a wide array of ghosts without ever having to leave your house or spend more than a couple bucks. Armed with this information, you’re ready to begin your paranormal investigations whenever the spirit moves you. Good luck.

Matt Crowley is a writer and comic living in Queens. You can find more of his writing on McSweeney’s, the AV Club, and Splitsider, and follow him on Twitter. He is not afraid of any ghost.