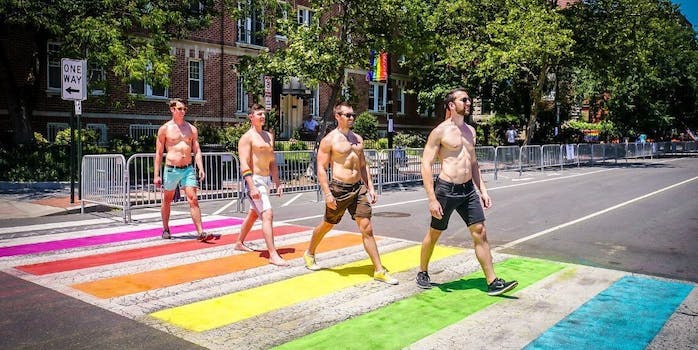 Unless he's literally been stuck there forever.

A picture of a man “refusing” to step on a gay pride rainbow crosswalk has gone viral on Twitter.

The image posted by @SteveFranssen yesterday morning is captioned, “This man in the state of Georgia is refusing to walk on the LGBTQ crosswalks. A hero! The eyes of the world are watching!”

Plenty of people agreed with the sentiment, which seems to be something along the lines of “if you step on the rainbow, you might get some gay on you, ewww, gay.”

Their comments—such as one who called the gay pride crosswalks “enforced virtue signalling” and the one that called LGBTQ people “deviants” whose misappropriation of the rainbow symbol tempts God to destroy the world with fire (not making this up)—were drowned out by people who disagreed with them in a sort of intra-thread ratioing.

Most people who commented were just there to dunk on the tweet.

“What is even up with you guys at this point,” asked one. “Who among us has not attempted to get run over by a car to make a non-existent political point to bigots?” another inquired.

“Nobody tell him the rest of the street is Black, he’ll never be able to leave the house,” joked @tarbosaur. “Just in: man defeated by CareBear Stare,” quipped @crocsushi.

Several people were inspired. “If we paint rainbow lines in front of voting stations, they can’t enter y’all, chalk it up like people use salt lines to keep out demons,” suggested @HallionI.

A hero for being stuck on a street corner because he's afraid of paint on the street?

I want a follow up with him, just living on that corner. Trapped by rainbows….

Oh, so suddenly it's BIGOTED to be so upset by a symbol that reminds you that gay people exist that you fold your arms and stomp your little feet and refuse to cross the road?????

I prefer the term “hetero bitch” for these people, because it’s funny to watch the people who use gay as an insult suddenly lose their shit when their sexual orientation is on the receiving end.

Does he also stay indoors when it's forecast sunshine and showers just in case a rainbow appears in the sky and he's afraid he might find a pot of cock at the end of it?

I'm going find out where you live and paint a rainbow around your house.

As a few Twitter users pointed out, there’s a couple of problems with the original tweet: 1) the photo is actually a five-year-old Associated Press image; and 2) the man didn’t “refuse” to cross anything.

People will be happy to know that no one was hurt in the making of this inaccurate tweet.

The crosswalks, though, have become a permanent feature of downtown Atlanta.