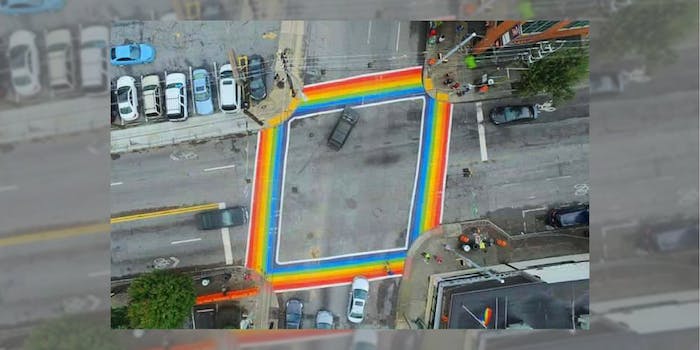 Atlanta’s rainbow crosswalks will soon be a permanent fixture

On Tuesday, June 12, the one-year anniversary of the tragic Pulse nightclub shooting in Orlando that killed 49 people, Atlanta mayor Kasim Reed announced that the city’s once-temporary rainbow crosswalks will be permanently revived.

Making history one small step at a time. The ribbon cutting of @atlrc | October 9, 2015

The rainbow crosswalks were first installed in October 2015 during Atlanta Pride Week, at the crossing of Piedmont Ave. and 10th St., a Midtown intersection known to be a hub for the city’s LGBTQ community. Much to the dismay of the community, the crosswalks were removed shortly after. But in solidarity with Atlanta’s community, as well as the gay and Latino community attacked in Orlando, Atlanta will keep the intersection’s colors permanently.

“Today, on the anniversary of this horrific event, we remember those whose lives were lost and those that were forever changed. Our thoughts and prayers were with you then, and they remain with you today,” Reed’s statement read.

“For the past year, Atlanta has grieved alongside Orlando. Our city has rallied around our LGBT community, and we have not shied from demonstrating our unity and solidarity. And with this spirit, I cannot think of a more important time to reaffirm our unwavering and unqualified support for our LGBTQ residents,” the statement continued.

According to the Atlanta Journal-Constitution, the effort to maintain the intersection’s lively state was led by Atlanta musician and LGBTQ advocate Sarah Rose. With a Care2 petition signed by more than 22,000 people, Rose pushed for the city to permanently paint at least one Midtown crosswalk with colors of the rainbow or transgender flags.

“This is an amazing day for Atlanta’s LGBTQ community,” Rose said in a statement. “This Care2 petition was about more than a crosswalk, it was about over 20,000 people coming together to show they exist.”