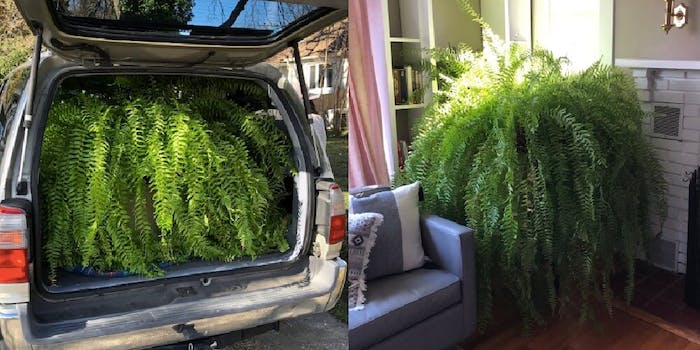 Most of us have had the experience of buying something online and it not being exactly what we expected when we receive it. Riley Leight shared a story on Twitter about such an incident after buying a fern described as “large” only to later find out that “large” was an understatement.

“i bought a fern that was simply described as ‘large’ and i did not know what the f*ck i was getting myself into,” Leight wrote on Twitter.

i bought a fern that was simply described as “large” and i did not know what the fuck i was getting myself into pic.twitter.com/91TdduRzCF

The tweet also included a photo of the gigantic fern, which completely fills the trunk of a car and could be better described as a mini tree. Leight continued describing the shock of buying the monstrously big, $40 fern.

“no matter where we put it it looks menacingly gigantic,” Leight wrote.

no matter where we put it it looks menacingly gigantic pic.twitter.com/jdwQLytGiZ

People loved the hilarious story and were quick to ask the important questions–like what’s the fern’s name, and would Leight put googly eyes on it?

ok FAQ: it was grown indoors. they sold it to me because they needed the space. yes i know you can split them. most of the advice people are giving is wrong so please stop giving it. no i will not name it, put googly eyes on it, or continue moving it around my house

Twitter users took matters into their own hands after Leight announced that the fern would not have googly eyes.

“Wait, I did the same thing with some local freebox hostas! They were…bigger than expected,” Twitter user @kittylongmuto wrote.

Wait, I did the same thing with some local freebox hostas! They were…bigger than expected. pic.twitter.com/Bw97V7YWmv

We also have a giant fern! This is Gus-Gus the asparagus fern. They have to come inside in the winter, and weren’t getting enough light so we had to build them a cage for grow lights. (We’ve added two more since this picture) pic.twitter.com/3Effd2ecB4

I got this giant begonia from a buy nothing group and it’s only gotten bigger pic.twitter.com/7d2ycI256h

Whether or not they have names and googly eyes, we’re happy all these big plants have good homes.