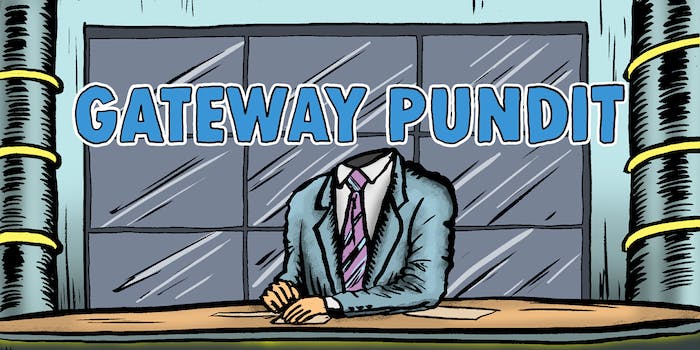 What is the Gateway Pundit?

A look at one of America's most popular political blogs.

In February, a think-tank sponsoring a live panel event in the run-up to the Conservative Political Action Conference on the “suppression of conservative views on social media” banned Jim Hoft from appearing. Hoft, the founder of the fringe right-wing blog the Gateway Pundit, had been booted by the American Principles Project for propagating conspiracy theories on his website about a student survivor of the Parkland school mass shooting.

While Hoft blasted the foundation for trying to “censor” him, APP executive director Terry Schilling cited the blogger’s “unfair and distracting coverage of the Florida shooting” as not representative of conservative ideals.

After being forced to oust Hoft from the panel, conservative activist and event organizer Pam Geller also dropped out. Schilling was then challenged during the event by other right-wing activists about deplatforming Hoft.

Whatever Schilling’s high beliefs about conservatism, however, a closer look shows that not only is conspiracy peddling par for course at the Gateway Pundit but the blog stands as influential and essential as any right-wing publication to many anti-establishment conservatives and those on the fringe right.

What is the Gateway Pundit?

Established by Hoft in 2004, the Gateway Pundit is one of the most read conservative blogs online, despite a record of dubiously sourced stories and conspiracy peddling.

The site reached peak popularity when it aligned with Trump during his 2016 election. During the election run the website boasted more than a million unique visitors a day and so the Gateway Pundit quickly became, alongside the likes of Breitbart News and the Daily Caller, as a major node in the right-wing alternative media ecosystem.

More than that, both Trump and former members of his campaign are fans. On the campaign trail, Trump tweeted links to the Gateway Pundit on 14 occasions and even referenced one article in his Republican nomination acceptance speech.

By February 2017, rising regard for Hoft’s website on the political right had resulted in reporter Lucian Wintrich being granted official White House press credentials. The access, however, arguably the envy of many new media publications, has not changed the style or nature of the provocative hyper-partisan coverage criticized for playing fast and loose with the facts.

Fact and politics after Parkland

After the Parkland shooting, the Gateway Pundit pushed the rumor that shooter Nikolas Cruz was “a registered Democrat” before later issuing a correction. Days later, it began to dig in on survivors.

“School Shooting Survivor Turned Activist David Hogg’s Father in FBI, Appears To Have Been Coached On Anti-Trump Lines,” reads the headline on the article that ended Hoft’s place on the APP-sponsored panel.

The article accused 17-year-old Hogg, a vocal gun control advocate after the mass shooting, of being “a pawn for anti-Trump rhetoric and anti-gun legislation.” In a follow-up piece, the Gateway Pundit further claimed that left-wing organizations linked to liberal billionaire philanthropist George Soros had “selected anti-Trump” students to the be the “face of Parkland tragedy.” It then escalated its assessment of Hogg, running with “crisis actor” conspiracy theories that were taking off elsewhere.

The Gateway Pundit and conspiracy

When it comes to mass shootings, the Gateway Pundit has tended to put politics before facts. On one occasion it falsely framed a shooter as an Obama supporter, citing a hoax Facebook page. In another incident, the site alleged the mainstream media had doctored photos of a shooter to make him “more white.” Following the Las Vegas shooting in Nevada, Hoft’s publication completely misidentified the perpetrator as well as hastily labeling him a Democrat.

In fact, progressive media watchdog Media Matters For America ran a list last year of more than 20 times that the Gateway Pundit has pushed conspiracies or published factually inaccurate stories.

During the 2016 presidential campaign, the Gateway Pundit really made its name when it ran several stories speculating on the health of Trump’s Democrat rival Hillary Clinton, which led to wider questions about her fitness for office.

One story, leading with a video that showed Clinton collapsing, alleged that she had suffered “seizures.” The story was quickly picked up by Fox News host Sean Hannity, who invited contributors to assess Clinton’s health problem on air. The hyperpartisan narrative gave the Gateway Pundit lasting credibility with some in the mainstream conservative pundit class and expanded its future reach.

Hoft rejects that his blog pushes fake news and the charge that the Gateway Pundit is far-right, a label he said is “used by Democrats and far left media to smear anyone who opposes the leftist narrative.”

“Our track record is comparable or better than mainstream media,” he said in a recent brief interview with the Washington Post via email. “We didn’t fall for the false Trump-Russia collusion scandal.”

This, however, has not stopped the site suffering under Facebook’s move in January to limit politically polarizing clickbait hitting users’ News Feeds.

On Jan. 12, the social media network announced that it would prioritize news content based on its trustworthiness.

“Publications deemed trustworthy by people using Facebook may see an increase in their distribution. Publications that do not score highly as trusted by the community may see a decrease,” Facebook’s head of News Feed Adam Mosseri wrote in a blog post.

As the changes started to roll out, conservative and right-wing publishers were impacted most by the updates, according to the Outline, and the Gateway Pundit’s Facebook engagement dropped 55 percent between January and February. As far as Facebook is concerned, the Gateway Pundit is part of a wider problem.

Hoft blasted the move as “criminal” and “fascism in action,” calling for the government “to regulate Google and Facebook.”

“Today far left tech giants want conservative sites eliminated,” he wrote in March. “The left is even targeting the advertising and income of conservative websites… The Gateway Pundit does not rely on Facebook for our traffic numbers. Still, we saw a significant drop in Facebook traffic last month.”

Hoft’s site remains one of the most read and influential political blogs, a position it will likely hold for a long time. What’s clear from the panel deplatforming incident, however, is that mainstream Republicans might be growing uncomfortable with the reportage of their Trump-era anti-establishment bedfellows.