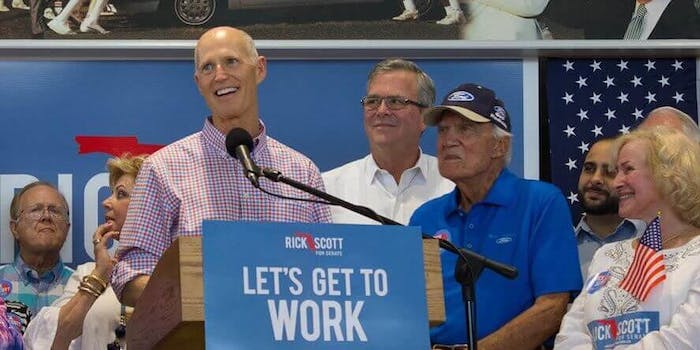 Amid soaring joblessness due to the coronavirus pandemic, Florida’s faulty unemployment website has made it nearly impossible for people to file for benefits. Glitches and errors even led the state unemployment office to temporarily shutter the website for maintenance earlier this week.

In an explosive story, today Politico reported that the system was designed to fail. Many, among them Republicans, blame Sen. Rick Scott (R-Fla.), who was governor when the $77.9 million website was designed.

According to Politico, Scott wanted to make it harder for people to file to falsely deflate the numbers of people seeking unemployment.

“It’s a shit sandwich, and it was designed that way by Scott,” one advisor to Florida Gov. Ron DeSantis reportedly said.

“It wasn’t about saving money. It was about making it harder for people to get benefits or keep benefits so that the unemployment numbers were low to give the governor something to brag about.”

Republican Party of Florida Chairman Joe Gruters even said that “someone should go to jail” over the pricey, defective website.

The website was among numerous changes Scott made to lower unemployment benefits and decrease tax on businesses. His administration also pushed through severe reductions in benefits.

Floridians can collect a maximum of $275/week for unemployment, among the lowest in the nation.

Scott’s spokesperson defended his record, telling Politico via email, “His goal was to make sure every Floridian who wanted a job could get one, and turned the program into a re-employment system so people could find employment.”

Rep. Jose Javier Rodriguez, a Miami Democrat, told Politico that while Scott is “the most culpable … I don’t know of any Republican who resisted these efforts to make Florida the most Scrooge-like state in the nation.”

Orlando Democratic state Rep. Anna V. Eskamani tweeted, “Republican leaders rage as everyday Floridians struggle to get the benefits they need & deserve via a system & website designed to NOT work.”

The defective website led DeSantis to order the state to accept paper applications. The state is also working on a mobile app and reportedly plans to deploy up to thousands of state employees to handle the massive influx in unemployment benefits applications.