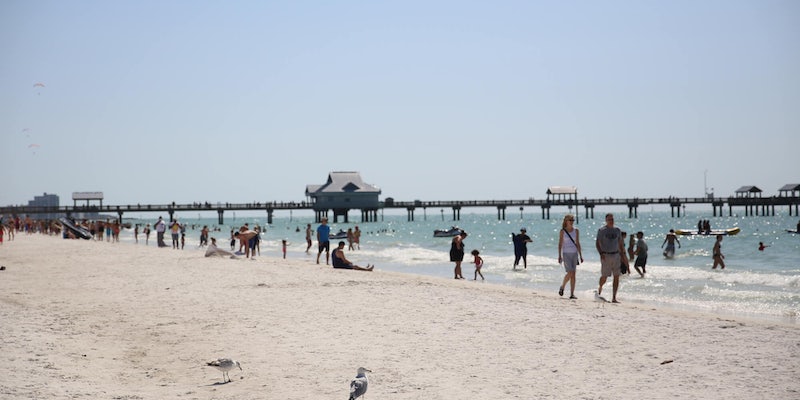 With coronavirus quarantine and social distancing in full swing, spring breakers have still been flocking to the beaches of Florida. That is until Florida Gov. Ron DeSantis (R) closed them Thursday.

While the beaches were still open, memes about beachgoers have circulated.

“Well, if they won’t Close the Beaches in Florida, time for the Bugs Bunny method of #SocialDistancing,” Twitter user JeanDunn52 wrote, accompanied by a gif of Bugs Bunny sawing the entire state of Florida off of the contiguous United States.

Native residents of Florida were also surprised to see that the beaches were still open, posing further threat to a population battling coronavirus.

“Me, a born floridian, looking at these overcrowded beaches while we’re out here trying to battle the coronavirus,” @jerricaofficial wrote in a tweet. “Just close the beaches already.”

A Florida lawyer went as far as making a video showing his attempts to meet with DeSantis in a sanitary suit and mask.

“We are not gonna stop until the beaches are closed because it’s a danger to our community,” Daniel Uhlfelder said in the PSA. “We urge Gov. DeSantis to close the beaches because the executive order he has in place is not enough.”

The memes began in earnest after a CBS News interview that went instantly viral showed students in Florida who pledged to keep partying despite the outbreak.

“Every college kid on spring break when they actually close the beaches and bars #StayTheFHome,” @juliocandoo wrote in a tweet.

Outrage online over the college kids helped spark the #CloseTheBeaches movement, which led to DeSantis closing down the beaches today.

But people weren’t done mocking those who were still going out despite warnings to stay home.

Some compared the situation to the 1975 blockbuster Jaws. Specifically, they referenced the fictional mayor of Amity Island, who refused to cancel their Annual Regatta after claims of the eponymous shark’s presence at the beach were brought to his attention.

“I never actually finished Jaws but the mayor refusing to close the beaches was the right call, correct?” @iamchrisscott wrote in a tweet.

“What we really need to do is get our influencers—Kevin Durant, Donovan Mitchell, Kylie Jenner—we need to get our social media influencers out there and help folks understand that this is serious,” Dr. Adams said. “People are dying. We are seeing new data emerging from Italy that young people may be at higher risk in different situations than what we previously thought. Think about your grandmother, think about your grandfather, think about the fact that your’e spreading disease that could ultimately kill them.”

Adams warning about young people comes as new CDC data was released, which found that young and middle-aged adults are just as susceptible to the symptoms of COVID-19, as they make up a large number of coronavirus hospitalizations, according to the Washington Post.