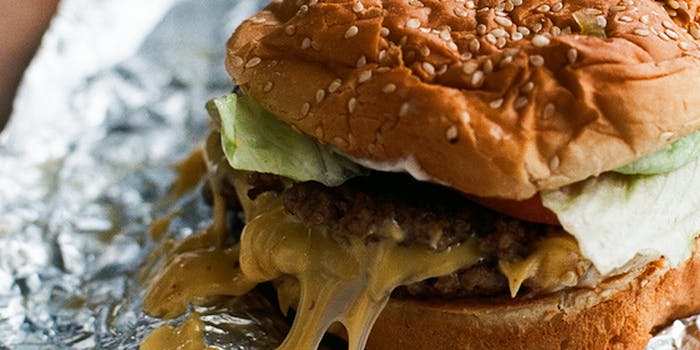 Five Guys accidentally emails customer about what a ‘douche’ he is

Burgers with a side of shame.

Ever wondered just how nasty restaurant managers can be when you have the temerity to complain about their service? Have we got an email for you.

Consumerist obtained an intra-company missive on which a dissatisfied customer was accidentally copied, and it doesn’t reflect too well on the beloved fast food chain Five Guys*.

The fact is, a guy from Massachusetts named John really likes Five Guys: he and his coworkers often put in group pick-up orders on the restaurant’s website. But there came a day when the office was charged for fries that were missing. After filing a polite complaint online, he received an equally polite offer to credit the money back, plus a gift card.

All’s well that ends well—except, John noticed, the gift card could only be used in person, and not on the Five Guys website. When he mentioned this to the district manager he’d been in contact with, that employee fired off an angry email to a coworker, maligning John as “a perfect example of why this world is fucked,” which does seem a tad harsh.

Thankfully, a Five Guys rep from HQ got wind of the gaffe and set to working on a peace agreement right away. “She has given me a couple of proposals to win back my group’s business,” John told Consumerist, adding that he believes in second chances. Rationalize it all you want, man—you were never going to walk away from that bacon cheese dog.

*Full disclosure: Five Guys is the best thing to happen to burgers in New York since I can remember and I fully hope they run yuppie Shake Shack out of town. Given how nice the employees always are, and the clean low-key atmosphere, and the unlimited free peanuts, I’m inclined to call this an isolated problem, but these events speak for themselves.