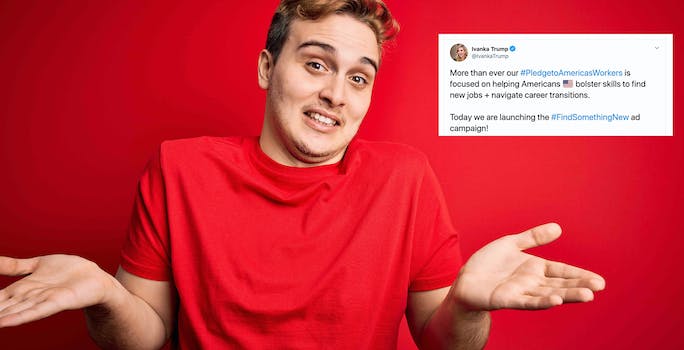 It reeks of callousness.

The White House on Tuesday morning launched perhaps its laziest response to the coronavirus pandemic—which is saying something given President Donald Trump and his aides’ repeated efforts to minimize, ignore, and not respond.

Somehow, this one tops them all.

The U.S. unemployment rate currently sits at 11% after skyrocketing in the first months of the pandemic as businesses shut down.

Now, as unemployment benefits are set to run out, the White House has launched a campaign for people still hoping their old job might return: “Find something new.”

“More than ever our #PledgetoAmericasWorkers is focused on helping Americans bolster skills to find new jobs + navigate career transitions.” Ivanka Trump tweeted. “Today we are launching the #FindSomethingNew ad campaign!”

The program is ostensibly designed to help workers retrain for new careers and kicks off with an ad campaign. Per the Associated Press:

The initial 30-second spot features ordinary people talking about their experiences with career challenges and transitions. Among them are a fitness instructor who completed an apprenticeship program and became a welder after her gym went under, and a man who lost his job twice in one year, took online certification courses and now works as a tech consultant.

The campaign pushes a website that helps point unemployed people to resources for training and virtual learning.

But at a time when many people have been sitting around jobless for over four months and companies aren’t hiring, the flippant nature of just “find something new” didn’t sit well with people.

“Honestly just realized that #findsomethingnew is the actual White House hashtag for its response to the unemployment crisis and not a dark joke,” wrote New York Times columnist Michelle Goldberg.

Others noted that the campaign was being launched on Bastille Day, and the way it ignored the realities of the current economy compared unfavorably to a certain French queen.

Even some conservatives were appalled by the idea, with one calling it “politically stupid.”

Unlike in the Great Depression, where the government undertook the massive effort of employing as many Americans as possible, the Trump administration has decided that finding a new job in the worst economy most any American has ever seen is entirely up to you.