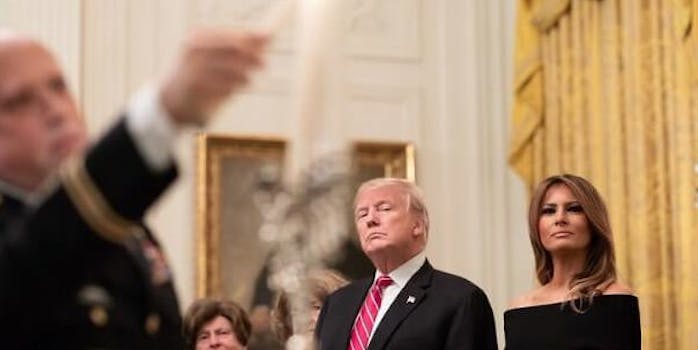 They've got their traditions crossed.

Today is the first day of Hanukkah. Presumably to mark the occasion, last night the White House tweeted a bit of Hanukkah trivia from its Advent calendar.

“Who was the first president to observe Hanukkah by lighting the National Menorah in a ceremony in Lafayette Park? Find out on the Advent calendar!”

There’s just one problem: Advent calendars are a Christmas—as in Christian—tradition. Hanukkah is a Jewish holiday.

Who was the first president to observe Hanukkah by lighting the National Menorah in a ceremony in Lafayette Park?

People on Twitter were quick to point out the faux pas. Some astute observers noted that the menorah pictured had the wrong number of candles. Lots and lots came with the jokes.

“‘The Jew holiday is good trivia for our Christmas festivities,’” one wrote. “Oy,” another wrote, to which someone responded, “In this case–oy to the world.”

“Of course the White House puts Hanukkah on its Advent calendar!” Eric Columbus quipped. “It’s like those crappy new Hallmark/Lifetime movies where Jews learn the true meaning of Christmas, but with your tax dollars.”

“Hanukkah and Advent? Say what?” tweeted Pulitzer Prize-winning journalist David Cay Johnston. “And why, on the first night, are all the Menorah candles lit? Oh, I forgot, the White House is now filled with people who have no idea what they are doing. What’s next? A creche with the baby Rudolph?”

“Keeping track of Hanukkah with the White House Advent calendar is pretty much all you need to know about this administration,” @MikeLastort commented.

“I’m interrupting my Twitterless holiday week to ask why the holy hell Hanukkah is on the White House Advent calendar. And then I remember why, and that it has nothing at all to do with honoring Hanukkah, or Judaism,” CNN analyst Carrie Cordero said.

So these two Corinthians walked into a temple…

I'll check that out as soon as I finish hanging these Easter ornaments on my Halloween tree. It's a tradition the pilgrims brought over from Hawaii.

Great .. Now there will be a war on Hanukkah …

Whoever handles the WH Twitter account really should be demoted, or at least be sent back to school for some religious education. https://t.co/Yd3sY5BA6h

Yeah, and why so many candles? Tonight’s the first night. pic.twitter.com/3SdPOjX7Bg

Went into Starbucks today. As I'm paying for my order.

Me: “You don’t have to be afraid anymore… Because of Trump, you can say it now.”

Barista: *relieved* “Happy Advent Hanukkah!” and she started to cry….

And then everyone clapped.

So what exactly is the White House advent calendar? Open a door and find a chocolate figurine of a convicted associate? https://t.co/Y9nVzhJuJU

In case you’re wondering, Jimmy Carter was the first president to light the menorah in Lafayette Park, though it wasn’t known as the National Menorah until Ronald Reagan called it that in 1982.