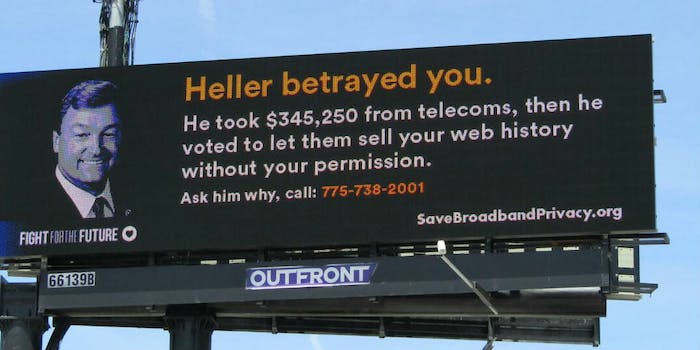 Lawmakers who betrayed your privacy get faces plastered on billboards

It won't bring back internet privacy, but it sure feels good.

The politicians who sold out your online privacy to internet service providers last month are getting their faces plastered on billboards in their hometowns. You can thank internet activists at the nonprofit Fight for the Future for commissioning the billboards, which feature four representatives who voted for the universally unpopular resolution.

The four featured lawmakers are Marsha Blackburn (R-TN), Dean Heller (R-NV), John Rutherford (R-FL), and Jeff Flake (R-AZ). Before you call out the group for only going after Republicans, do remember that only Republicans voted to repeal the FCC bill. As Gizmodo points out, the four lawmakers accepted almost $200,000 in campaign contributions from the telecom industry last election cycle.

The billboards include the name and photo of a lawmaker along with how much money they were given by telecoms during their campaigns. For example, “Blackburn betrayed you. She took $497,499 from telecoms, then she voted to let them sell your web history without permission.”

The message ends with the lawmaker’s phone number and a call-to-attack to ask why they did it.

The Verge posted a handy list of every lawmaker who voted against online privacy, including how much telecom companies paid them during their most recent election cycle. Feel free to use it if you’ve got extra cash to buy out some ad space.