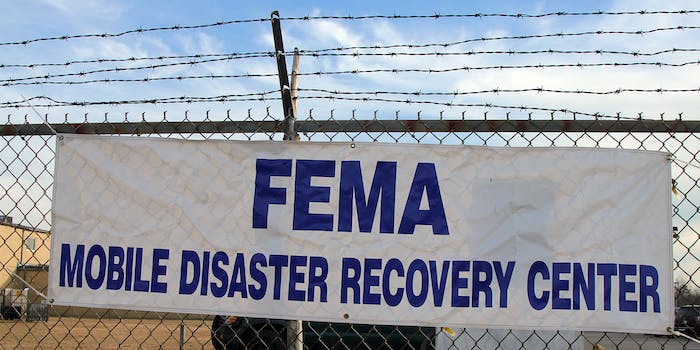 An age-old American conspiracy is being revived thanks to COVID-19.

2021 is proving to be another big year for conspiracy theories peddled by those in power, and in January, Florida Gov. Ron DeSantis (R) offered up one of the classics.

“I saw some of the stuff that Biden’s putting out, he’s going to create these FEMA camps or whatever—I tell you that’s not necessary in Florida,” DeSantis responded, invoking a theory that’s been lurking in the right-wing fringes of the internet for decades. And, like most breathlessly shared conspiracies, the lack of facts has done little to slow it down.

The basic premise of the “FEMA camps” theory is that the Federal Emergency Management Agency (FEMA) has developed a network of large-scale buildings to use as prisons for the American people. The question of who would be thrown into these detention centers or why the agency would pivot away from emergency response to rounding up citizens depends on which of the many iterations of the theory you believe.

In an article for GEN, author Colin Dickey traces the seeds of the idea back to a 1979 pamphlet called “Concentration Camp Plans for U.S. Citizens” by Dr. William R. Pabst. This guide served as a “warning,” pointing to existing sites, including federal facilities operating under capacity and a former Japanese internment camp, as potential future “concentration camps.” As Dickey notes, the pamphlet was published in the same year that FEMA was created, tying the burgeoning agency to unproven, fringe theories from its inception.

The Southern Poverty Law Center (SPLC) offers another early example of the theory, a 1982 newsletter from the “extreme-right and anti-Semitic Posse Comitatus.” The hate group warned of FEMA camps as detention centers for “hardcore Patriots,” language that’s almost identical to the FEMA theories that populate social media today.

Both explainers note the real-world roots of the conspiracy, which is loosely based on the United States’ past applications of martial law and use of internment camps. It also draws largely from unearthed federal contingency plans for dealing with national crises or unrest, including unverified memos. From there, these theories become a choose-your-own-adventure of mass imprisonment, tailored to fit current events and administrations.

The theory enters the new millenium

The FEMA camps theory strengthened in the 1990s, even making it into a congressional hearing. According to the SPLC, the Senate Judiciary Committee entertained discussion of it after the 1995 Oklahoma City bombing to learn more about the “Patriot/militia subculture.”

But it was the next decade that provided fuel to ignite the flickers of the theory. FEMA’s much-denounced handling of Hurricane Katrina increased public scrutiny and skepticism of the agency, while burgeoning social media platforms gave a place for these theories to be compiled and shared with a broader audience.

Under the Obama administration, the conspiracy surged once again, thanks in part to amplification from Glenn Beck, Alex Jones, and militia-minded groups like the Oath Keepers. It all hit a fever pitch in 2015 when conspiracy theorists seized on a military training exercise known as “Jade Helm,” claiming it was a cover for a takeover that would ultimately lead to that long-awaited FEMA camp imprisonment.

Like the years of predictions before it, these failed to come true. And the increased attention on the theory led to outlets including Snopes, Popular Mechanics, and, eventually, Glenn Beck debunking its core pillars.

Even with evidence mounting against it, the theory continued to proliferate across the internet, and it didn’t take long for it to be given a new spin as the country grappled with COVID-19.

FEMA camps and the pandemic

Today, a search for “FEMA camps” readily pulls up conspiracy content across platforms. On Google, it’s a user-created map of all the “camps” in the U.S. with more than one million views.

On Amazon, there are books, including that 1979 pamphlet (which is currently out of stock). And the theory is still easily accessible across most social media sites, despite platforms claiming to be cracking down on such misinformation in recent years and promoting their no-tolerance policies for theories like QAnon.

For example, there are still countless FEMA camp videos on YouTube, including handheld, Blair Witch-style footage of purported camps, some with hundreds of thousands of views.

“Some believe a global elite of bankers and aristocrats may artificially create a disaster to trigger a massive incarceration of US citizens,” proposes one explainer, before presenting another theory that there are running lists of which Americans will get sent to these camps —and which will be executed. One of the sources the video names is Alex Jones.

Similar conversations are easy to find on Reddit, where FEMA camp posts have been populating subreddits like r/conspiracy for years (and now have their own). The same’s true on Facebook, where a search for the term pulls up a series of public pages, which plainly reveal their conspiratorial bent.

For some, it’s become a meme, its resiliency through the years making it all the more ridiculous. But the conspiracy continues to convince enough people to create a headache for politicians attempting to address COVID-19.

On Sept. 8, 2020, Ohio Governor Mike DeWine (R) detoured from his regular coronavirus briefings to address a “rumor” he felt he could no longer ignore.

“This comes in the category of crazy, ridiculous internet rumors, but obviously some people are reading it and so I want to clarify it,” DeWine began before launching into an explanation of FEMA’s role in federal coronavirus response. He then detailed the reasoning behind the state’s push to create places for those with the virus to shelter, citing the needs of first responders, among others.

“Now, make it very clear, this order does not create FEMA camps to force anyone to quarantine against their will, as has been reported on the internet,” he added, revealing that “crazy, ridiculous” rumor was none other than a continuation of the FEMA camp theory, this one including the separation of children and parents based on virus exposure.

DeWine’s denouncement made headlines, as did the rebuttal to his statement from Ohio House Leader Republican Bill Seitz, who indicated that the creation of these camps was, in fact, possible. Not long after, New York dealt with its own “concentration camp” rumors, which seized on a New York State Assembly bill first introduced in 2015 in response to the Ebola virus. The legislation called for officials to have the authority to detain people with medical conditions that were a public threat.

This, according to Politifact, was twisted in social media posts to claiming New York was trying to “round up non-mark wearers” into camps where they would be court-ordered to get vaccinated. The assemblymember behind the bill says he’s since received threats over it.

And, after all of that, came DeSantis’ press conference.

Vaccination centers have already proven to attract protests from those who traffic in conspiracies. The past month has also proven the ability of fringe theories to have serious real-world implications. Still, this time-tested theory has not only flown under the radar of social media standards but is being amplified by those with the influence, potentially putting a target on officials trying to support states like Florida—which can reportedly use the help.