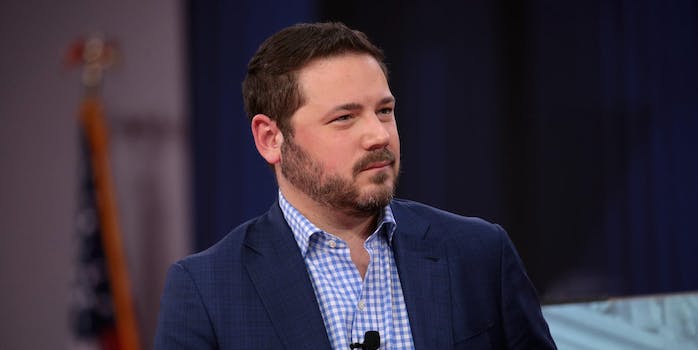 The Federalist founder tweeted an anti-union joke. It’s going to get him in trouble

The Federalist argues that even if it's illegal, the wrong person complained.

The Federalist is being accused of unlawful labor practices over co-founder Ben Domenech’s tweet discouraging employees from unionizing.

“FYI @fdrlst first one of you tries to unionize I swear I’ll send you back to the salt mine,” Domenech tweeted on the same day that Vox Media employees walked out amid negotiations to unionize.

Domenech probably thought that this was a harmless, if tired, joke.

There’s just one problem: Union-busting is illegal, as in line-in-the-sand illegal.

Someone subsequently filed a complaint with the National Labor Relations Board (NLRB) alleging that the tweet constituted an unfair labor practice.

Yesterday, the organization representing the Federalist outlined its case on Twitter.

Intriguingly, their arguments have been largely procedural, rather than substantive.

The main thrust of the Federalist’s argument is that the person who filed the complaint wasn’t an employee, and thus isn’t an “aggrieved party” under the law.

It also claims that Domenech’s tweet wasn’t serious, is protected speech, and that the Federalist can’t be blamed for a co-founder’s statements. None of these arguments are particularly persuasive.

The claim that the complainant isn’t an aggrieved party is its best chance at succeeding in the case. But the NLRB has long held that non-employees can make such complaints, so even that’s a long shot.

The Federalist is represented by the National Civil Liberties Alliance (NCLA), which seeks to chip away at NLRB’s authority.

NCLA seems to fancy itself something of an anti-American Civil Liberties Union. While the ACLU tries to protect people from civil rights infringements, the NCLA seeks to dismantle administrative powers under the guise of defending constitutional freedoms.

While most view the NLRB as protecting employees’ rights; NCLA sees it conversely, as unconstitutionally infringing on the Federalist’s right to have their case decided in court, rather than by an administrative board.

NCLA further claims that allowing a non-employee to file a complaint enables them “to weaponize the NLRB against political opponents.”

The problem with this argument is that in order for an action to proceed, the employer must have interfered with employees’ rights. The NLRB wouldn’t proceed with a complaint unless it’s valid, so who filed it is irrelevant.

In fact, the conduct that constitutes an unlawful interference with employees’ rights is defined so broadly that this isn’t the first, nor even the second, instance of someone getting in trouble for union-busting by a tweet they claimed was just a joke.

Earlier this year, Barstool Sports settled a claim with NLRB that it engaged in unfair anti-union labor practices, in part by the owner’s tweeted threats.

In the settlement, Barstool Sports agreed to delete the tweets threatening to fire anyone who met with a union lawyer, as well as a Twitter account, and an anti-union blog post.

Amid efforts to organize a union at a Tesla plant, Musk tweeted, “Nothing stopping Tesla team at our car plant from voting union. Could do so tmrw if they wanted. But why pay union dues & give up stock options for nothing? Our safety record is 2X better than when plant was UAW & everybody already gets healthcare.”

A judge held that this tweet was part of an illegal effort to sabotage union attempts, Vox reports. Tesla appealed; the case is ongoing.

Thus, it’s no surprise that Domenech’s tweet was immediately met with an avalanche of criticism. Several tagged NLRB. A few jokingly asked if the salt mine funded the Federalist.

If the complaint against the Federalist is ultimately successful, Domenech will have to delete that tweet.